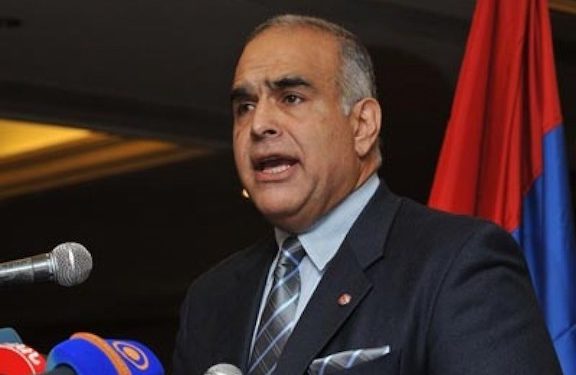 Armenia’s first Foreign Minister and the founder of the Heritage Party Raffi Hovannisian was barred from entering Artsakh on Sunday, said an announcement from the party.

Hovannisian, who served in Armenia’s parliament and was a presidential candidate in the disputed 2013 elections, was en-route to Stepanakert to attend his grandson’s baptism on Sunday when he was prevented from entering Artsakh territory by Russian peacekeeping contingent.

According to the Heritage Party statement, the commanding officer of the post showed Hovannisian an order, which include his photograph. The soldiers at the checkpoint gave no reason for the ban, but confirmed that “it could have emanated from the very ‘top’ of official Yerevan,” the Heritage Party statement said, adding that the Artsakh government was “taken aback.”

Reportedly, the Artsakh authorities scrambled for many hours to address the matter but ultimately were unsuccessful to clarify and then resolve the situation. The Heritage Party statement said that Artsakh authorities “claimed a possible linkage to Baku’s dictatorship.”

“The cowardice of this self-entitled command points in one direction alone.  It can only be one person, a failed leader, who must leave the scene together with his xenophobic neighbor for the sake of true regional peace and security,” said Hovannisian, who presumably was pointing his finger at Armenia’s authorities.

“A small group of us was headed to Stepanakert,” Hovannisian’s assistant Mamikon Sargsyan told Azatutyun.am. “The baptism of Raffi Hovannisian’s grandson—Garin Hovannisian’s son—was going to take place in the Nor Shen village in [Artsakh’s] Martuni region.”

At around 2 p.m. local time, Sargsyan explained, the Russian peacekeeping contingent meticulously examined the documents of Hovannisian’s guests, who are U.S. citizens and had obtained permission to enter Artsakh. After several hours, in the evening, the peacekeepers announced that only Raffi Hovannisian was banned from entering Stepanakert.

Sargsyan explained to Azatutyun.am that the Russian soldier approached Hovannisian and in an apologetic tone, showed him the order on his cellphone. The order read: “Raffi Hovannisian’s entry to Artsakh is banned.”

Hovannisian’s aide explained that for several hours—from 7 to 11 p.m. local time—they were attempting to resolve the issue through Artsakh authorities. Having received no explanation, at around 11 p.m., Hovannisian’s entourage continued on to Artsakh and Raffi Hovannisian went to Goris, from where the Heritage Party announcement was issued. Artsakh president’s spokesperson had no comment when asked for clarification from Azatutyun.am.

Armenia’s National Security Service told Azatutyun.am that “Russian peacekeepers had banned Raffi Hovannisian from entering Artsakh,” adding they should provide explanations. The Russian peacekeeping contingent did not issue a statement, nor did Armenia’s NSS provide a clear explanation.

Father and Daughter Activists from Netherlands Denied Entry into Armenia

U.S. Calls on Azerbaijan to Pull Back Troops in Armenia