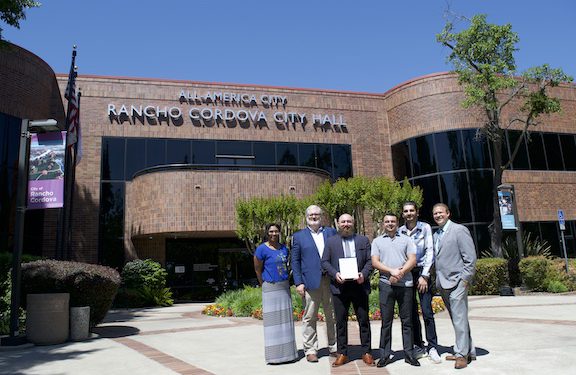 RANCHO CORDOVA, Calif.– Ahead of the Armenian Genocide anniversary, the Rancho Cordova City Council, with the leadership of Mayor Garrett Gatewood and Councilman David Sander, unanimously adopted a resolution on April 19 recognizing the right to self‐determination and independence of the citizens of the Republic of Artsakh, at the request of Andranik Poladyan, Naomi Matevosyan Poladyan, Habet Poladyan, and Arman Antonyan.

Furthermore, Mayor Gatewood issued a proclamation on January 28 recognizing Artsakh as a free and independent country.

Rancho Cordova is a city located in Sacramento County and was officially incorporated as a city in 2003 and was granted the 2019 All‐American City Award. The City is home to a sizable Armenian American community many of whom immigrated in the early 1990s from the Republics of Artsakh and Armenia.

“I, on behalf of your Armenian American constituents, express my appreciation and gratitude for the City Council’s time, consideration, and cooperation in accomplishing this important victory. It is an honor to accept the resolution and proclamation from the City on behalf of the community, and the greater Sacramento Region. It is promising to see Rancho Cordova uphold the rights of Life, Liberty, and the Pursuit of Happiness for the citizens of Artsakh. We are pleased to know that the City’s leadership is with us,” said Andranik Poladyan.

“The right of a people to self‐determination is at the very root of our democracy and our cherished freedoms in the UnitedStates. In Rancho Cordova, a relatively new city where our own residents declared their freedom from Sacramento County just a few short years ago, that message of freedom and self‐ determination rings true and is a cause we fully understand,” said City Councilmember Sander.

“That’s why we in Rancho Cordova are proud to support the request of our quite numerous Armenian residents to rally opinion and support for the right of self‐determination for their brethren in the Republic of Artsakh, and also point out the horror of the failure of such rights around the anniversary of the Armenian Genocide. It’s our sincere desire that other governments and world attention be focused on these human rights issues that are so dear to Armenians everywhere, and to the residents of the Republic of Artsakh in particular,” added Sander.

“Let this be another example to other cities and towns all over the nation where the Armenian nation resides, that recognition at the grass‐roots level is very doable and highly important in putting pressure on the Federal Government to officially recognize the Independence and Self‐Determination of the Artsakh Republic,” said Andranik Poladyan.

“As stated in the Resolution, ‘the Armenian Peoples will to survive, to flourish, and to contribute to humanity remains resolute.’ Our survival is the great victory. God Bless Rancho Cordova, CA, the USA, and the Republics of Armenia and Artsakh,” added Andranik Poladyan.