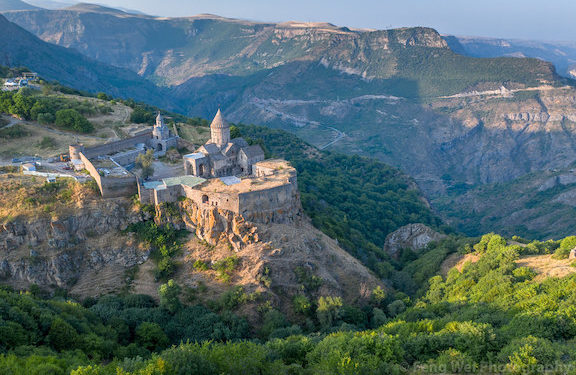 The 9th Century Tatev Monastery is the jewel of Syunik

SACRAMENTO—Assemblymember Chris Holden’s resolution, ACR 105, that establishes a sister state relationship between California and the Armenian Province of Syunik – the southernmost province in Armenia, was passed Friday by the California State Assembly, with an impressive 64 coauthors. The resolution is now in the Senate and if it passes the measure will be enacted, as it does not require the governor’s signature.

“For thousands of years, the state of Syunik has had profound historical and cultural significance for Armenia and the world,” said Assemblymember Chris Holden. “Strengthening our relationship with the Syunik comes at a critical time as regional powers like Azerbaijan and Turkey pose a threat to its existence.”

“Today’s resolution adopting the Province of Syunik as California’s sister state is an important declaration of friendship and I am proud to support this endeavor,” said State Senator Anthony Portantino, who is a principal co-author of the measure. “Many of my neighbors and constituents have family and friends living in Syunik.”

“ACR 105 serves as a connecting bridge to the Province of Syunik and I am confident the relationship will bring prosperity for both regions and facilitate mutually beneficial educational, economic, and cultural exchanges,” added Portantino.

“In 2019, I introduced SB 302 to re-establish the California-Armenia Trade Office in hopes of building a vibrant business relationship between California and Armenia. Governor Newsom signed an agreement to establish the first California Trade and Services Desk in Armenia. The formal MOU between GO-Biz and Impact Hub Yerevan was signed earlier this year. The establishment of a sister state relationship is a continuation of our efforts to strengthen ties with Armenia and represents the strong bond between people of California and Armenia,” explained Portantino.

“I enthusiastically thank Assemblymember Chris Holden for initiating this resolution of paramount importance,” said Consul General of Armenia in Los Angeles, Ambassador Armen Bairbourtian. “The establishment of a California-Syunik Sister State relationship will develop a multidimensional partnership between the U.S. State of California and the Armenian Province of Syunik. My gratitude also goes to all the state legislators supporting the resolution.”

“We welcome today’s passage of ACR 105 (Holden) by the California State Assembly, bringing us a step closer in formalizing the sister-state relationship between California and Armenia’s Syunik,” said ANCA-WR Executive Director Armen Sahakyan. “It is symbolic that the committee voted on this legislation as we celebrate the 30th anniversary of the Artsakh Republic and recommit our dedication to defending Armenia and Artsakh’s statehood and independence.”

Syunik is one of the original provinces of the ancient Kingdom of Armenia and is currently bordered by Artsakh or Nagorno-Karabakh, Azerbaijan, and Iran. Syunik is home to the Armenian Stonehenge, Karahounj, that dates back to the bronze age; The Ughtasar Mountain petroglyphs that are 7,000 years old; the 9th Century Tatev Monastery that served as a center of scholastic and spiritual activity. The most populated town in the province is its capital, Kapan with 43,000 residents.

In the aftermath of Azerbaijan’s renewed war against the Armenians of Nagorno Karabakh Republic, the Azerbaijani military crossed into the Republic of Armenia and moved 3.5 kilometers into Syunik Province, seizing the entirety of Sev Lake. The next day, the Azerbaijani military breached two other sections of the border and occupied more areas of Armenia. Azerbaijan’s illegal presence remains in Syunik, threatening Armenia’s sovereignty and the people who live there.