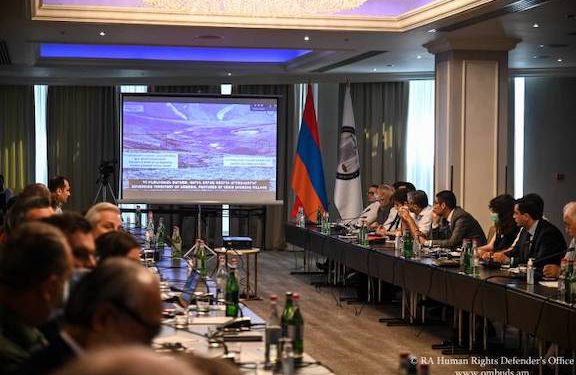 Armenia’s Human Rights Defender Arman Tatoyan made a presentation Friday to international representatives accredited in Armenia detailing facts about the violation of border residents’ rights by the Azerbaijani armed forces.

The press service of the Human Rights Defenders’s Office said the event was attended by heads of international organizations accredited in Armenia (US, Russia, France, Great Britain, Poland, Czech Republic, Serbia, Japan), including the Head of the EU Delegation, Ambassador Andrea Victorin, UN Resident Coordinator Shombi Sharp, as well as the Deputy Head of the Council of Europe Office in Yerevan Maxim Longang.

‘’The discussion was valuable in that human rights activists, non-governmental organizations, and independent experts participated and made important observations on the protection of the rights of border residents and the use of international mechanisms (UN Security Council, Council of Europe, etc.) for that goal,” Tatoyan said.

The meeting was also attended by Armenia’s representative to the European Court of Human Rights Yeghishe Kirakosyan, the First Deputy Commander of Armenia’s Border Troops of the National Security Service Arman Gasparyan, as well as representatives of the defense and foreign ministries.

In his opening remarks, Human Rights Defender Arman Tatoyan stressed that civil society organizations and human rights activists have a key role in effectively resolving issues related to the rights of border residents.

During the meeting, Tatoyan presented facts substantiating the presence of Azerbaijani armed forces near the villages of Gegharkunik, Syunik provinces and on the roads linking the communities of Syunik, as well as the fact that their actions violate the internationally guaranteed rights of the Armenian people, including rights to life, property and other vital rights.

Tatoyan also presented the results of the ongoing fact-finding mission.

“Due to the illegal acts of Azerbaijan, apart from security concerns, serious social problems have emerged. Due to the criminal acts of the Azerbaijani armed forces, the bordering rural residents are deprived of pastures and arable lands,” Tatoyan said.