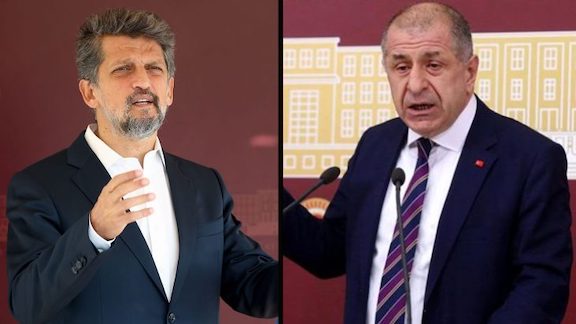 The Istanbul-based Human Rights Association (İHD) filed a criminal complaint against far-right independent member of the Turkish Parliament Ümit Özdağ, who threatened Garo Paylan with facing the same fate as his ancestors, the Stockholm Center for Freedom reported on Wednesday.

The İHD accused Özdağ, a professor of political science and currently an independent lawmaker from Turkey’s southeastern province of Gaziantep who served with the far-right Nationalist Movement Party (MHP) and İYİ Party in the past, of “inciting the public to hatred or hostility” in accordance with Article 216 of the Turkish Penal Code and Article 14 of the European Convention on Human Rights.

Paylan, an Armenian lawmaker representing the Peoples’ Democratic Party (HDP), released a statement on Twitter on April 24 criticizing the naming of streets in Turkey after Talaat Pasha, the de facto political leader of the Ottoman Empire during World War I who is held responsible for the deportations and atrocities committed against Armenians at the time.

The message drew an angry and threatening response from Özdağ, who repeatedly targeted Paylan and the country’s Armenian population.

“Shameless, provocative man. If you are not very pleased [about living here], go to hell. Talaat Pasha did not deport patriotic Armenians but those like you who hit [Turks] from behind. When the time comes, you will and should also go through a Talaat Pasha experience,” Özdağ tweeted on Monday.

In October Paylan was also targeted in newspaper ads published by the nationalist Center for Eurasian Strategic Studies (ASAM) think tank, founded by Özdağ, for comments he made about the clashes between Azerbaijan and Armenia.

The ads claimed that Paylan “shamelessly blamed Azerbaijan and Turkey and openly backed Armenia.” Describing the lawmaker’s words as evidence of treason, ASAM called on the “independent judiciary” and the Turkish parliament to take “the necessary steps” about Paylan.
Özdağ is also known for an anti-Syrian campaign that aims to send Syrian refugees who had to flee their country and seek refuge in Turkey back home.

In an interview with the Ayıntab daily, published in Gaziantep, Özdağ claimed that “Syrians were forced to migrate to Turkey in line with a project. The powerful instruments of imperialism will change the demographic structure of the region in order to increase the dominance of different ethnic groups according to their own strategy and drag the country [Turkey] towards a catastrophic civil war. They [the imperialists] are using migration as a tool of strategic [political] engineering,” adding that “Syrian refugees, unfortunately, are a huge problem for Turkey and Gaziantep.”

“Syrians have been looming over Gaziantep like a nightmare. I can’t call it migration, which not only makes the situation more complicated but also darkens the city’s future. In fact, we are witnessing a covert invasion today,” Özdağ told Ayıntab.

In addition, Özdağ had stated during a meeting of parliament’s Foreign Affairs Committee in October that Turkey was in danger of becoming a “Middle Eastern country.”

Exclusive: Armenian POW Vicken Euljekjian’s Daughter Opens Up About Letters from Her Father