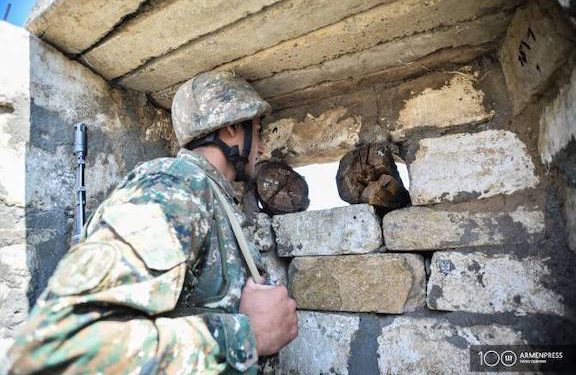 A soldier of the Artsakh Defense Army

The Russian peacekeeping forces in Karabakh and the Artsakh Defense Ministry on Friday denied reports by official Baku, which claimed that Armenians fired at Azerbaijani positions in Shushi.

Earlier in the day, Azerbaijan’s defense ministry alleged that from 1 to 2:15 a.m. (local time) Armenian forces opened fire on Azerbaijani post in Shushi. The embellished statement went on to claim that the Armenian side suffered casualties.

The Russian peacekeeping forces said they had not recorded a ceasefire violation on Friday, effectively denying Azerbaijani claims.

The Artsakh Defense Ministry called Baku’s claims “yet another disinformation.”

“The Ministry of Defense of the Republic of Artsakh reiterates that Defense Army units are strictly adhering to the ceasefire and are taking countermeasures only for thwarting provocations of the adversary,” said the statement.