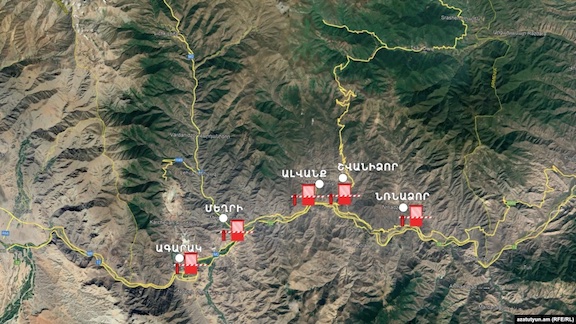 Images of such checkpoints along the road linking Meghri to other towns appeared on the internet earlier this week, raising speculations about possible preparations for the opening of transit routes for Azerbaijan via the strategic mountainous region.

Syunik is the Armenian province through which Azerbaijan expects to get a highway and railroad connection with its western exclave of Nakhichevan under the terms of the Russia-brokered 2020 ceasefire in Nagorno-Karabakh. Under the document, Russia’s Federal Security Service (FSB) is to ensure the security of traffic along the transport routes in Armenia for Azerbaijan.

Yerevan insists that it should maintain sovereignty over the roads, while Baku is seeking an extraterritorial status for them amounting to a corridor similar to the Russia-controlled Lachin corridor that connects Armenia with Nagorno-Karabakh.

At a government session on August 4, Armenian Prime Minister Nikol Pashinyan again implicitly rejected the corridor logic for the unblocking of regional transport routes, saying that Azerbaijan even today can use all parts of Armenia, and not only Syunik, for transit purposes in accordance with Armenian legislation.

“We have been saying all the while that we are ready to provide this connection between the western districts of Azerbaijan and Nakhichevan. We are ready to ensure this connection even today, but it is Azerbaijan that does not use these opportunities offered by us. Even today we say: come, cross the border of Armenia, go to Nakhichevan in the manner prescribed by the legislation of the Republic of Armenia,” Pashinyan said.

Pashinyan spoke after the latest escalation in Nagorno-Karabakh in which at least two Armenian and one Azerbaijani soldiers were killed in fresh fighting near the Lachin corridor where Russian peacekeepers are deployed under the terms of the 2020 ceasefire.

Amid the escalation the authorities in Nagorno-Karabakh announced that several Armenian villages along the current corridor would be evacuated until September when Armenians are to start using an alternative road connecting Armenia and the Armenian-populated region.

Bagrat Zakaryan, mayor of Meghri, told RFE/RL’s Armenian Service on Tuesday that the Russian checkpoints recently spotted in Syunik were actually set up several months ago. In total, he said, five such checkpoints were placed at roads leading from Meghri to several towns and villages in Syunik.
After media reports about the installation of new Russian checkpoints near Meghri, the FSB Border Guards Department in Armenia explained that it was done in coordination with Armenian authorities to prevent illegal cross-border activities.

“In order to expose, prevent and thwart cases of smuggling, illegal migration and other offenses, in accordance with the law of the Republic of Armenia ‘On the State Border’ and in coordination with the Government, the National Security Service and other competent bodies of the Republic of Armenia, a number of equipped positions were formed early this year for the implementation of the border control service,” it said.

According to the FSB, a tense situation has been observed recently at the Meghri section of the Armenian-Iranian state border due to increased attempts of illegally smuggling drugs and psychoactive substances from Iran to Armenia. Moreover, according to the Russian side, violations of the border by representatives of extremist and terrorist groups were also recorded.

“Last year, in the area of the border guard detachment of Meghri, Russian border guards arrested two armed persons who had a large amount of weapons and ammunition with them,” the FSB said.
Armenian government officials have not yet commented on the presence of Russian checkpoints along the roads in Syunik.