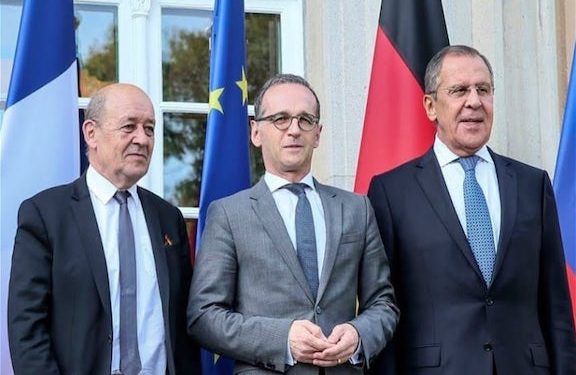 Russian Foreign Minister Sergei Lavrov on Monday discussed the situation in Nagorno-Karabakh and on the Armenian-Azerbaijani border with his French and German counterparts Jean-Yves Le Drian and Heiko Maas.

The implementation of the provisions of the statements of the leaders of Azerbaijan, Armenia and Russia dated November 9, 2020 and January 11, 2021 were also on the agenda, the Russian Foreign Ministry said.

“The importance of strict adherence to the ceasefire regime and the need for a political-diplomatic solution to emerging differences were emphasized. The ministers reaffirmed the role of the OSCE Minsk Group in the negotiation process between Azerbaijan and Armenia,” the statement said.

The Russian side noted that “any involvement of international organizations is possible only with the consent of Baku and Yerevan.”

According to the French Foreign Ministry, Minister Le Drian noted France’s full commitment to deescalating tensions between Armenia and Azerbaijan and resolving pending issues stemming from last fall’s conflict between the two countries. In this regard, he reaffirmed our desire to continue coordinating closely with Russia, particularly as one of the co-chairs of the Minsk Group, together with the United States, and within relevant international bodies.

The Minister underlined the importance of initiating negotiations between the parties on the challenges of demarcating and delineating the border, unconnected with developments on the ground. He reiterated the need for the parties to show the utmost restraint and to refrain from any provocations.