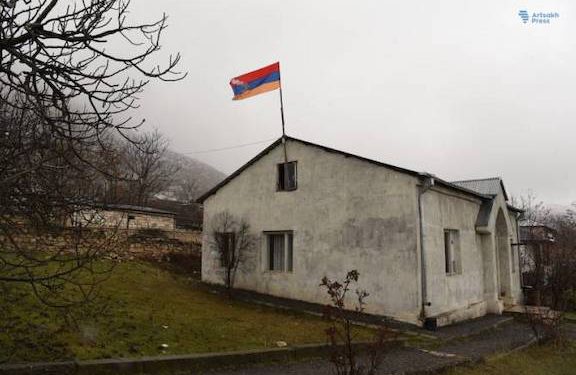 Russia’s foreign ministry apparently has edited comments made Thursday by the country’s top diplomat Sergei Lavrov, who said that the issue of Azerbaijan’s incursion into the village of Parukh in Artsakh’s Askeran region in March will be solved within the current talks between Baku and Yerevan on delimiting and demarcating the borders of Armenia and Azerbaijan.

Lavrov, who was speaking https://asbarez.com/moscow-baku-disagree-on-artsakhs-parukh-situation/ at a press conference with his Armenian counterpart, Ararat Mirzoyan, was specifically asked what the Russian peacekeepers were doing to de-occupy Parukh and push Azerbaijani forces back to their initial positions, since 400 residents of the area are unable to return to their homes because of Azerbaijan’s continued aggression.

“As for the situation [in Parukh], it is one of the priorities of the Russian servicemen, and our Armenian friends are very well informed about that,” said Lavrov. “There are also some results in terms of easing of tension on the ground, and we view that these issues will be observed and will be definitely solved within the launching substantive border delimitation efforts.”

Official Baku was quick to counter Lavrov’s statements, insisting that the Parukh region “has no connection with the border demarcation issues with Armenia” since it is located in Azerbaijan’s Khojalu region,

“The commissions created by Azerbaijan and Armenia are aimed at delimitating and demarcating of borders between the two countries,” Azerbaijan’s foreign ministry spokesperson Leyla Abdulayeva said in a statement.

Abdulayeva emphasized that it is not envisioned that the border process will address areas outside of the borders of Armenia and Azerbaijan, including those areas where Russian peacekeeping forces are temporarily being stationed.

According to a report by RFE/RL’s Armenian service, the Russian Foreign Ministry altering the Parukh reference in the text published on its official website, writing instead: “We hope that the launch of the process of demarcation of the Armenian-Azerbaijani border will contribute to the increase of trust between Baku an Yerevan and prevent incidents like Parukh in the area of ​​responsibility of the Russian peacekeeping contingent.”

The Russian “Kommersant” newspaper, meanwhile, quoted Lavrov’s unedited statement in an article, stating that the Parukh issue has become a “sore subject” for Baku.

“In March, a confrontation almost started between the Russian peacekeepers and the Azerbaijani soldiers, who occupied the village without agreeing with Moscow. At the same time, from Baku’s point of view, the military had the right to do so, as Azerbaijani power extends to the entire territory of Karabakh,” wrote Kommersant, according to RFE/RL’s Armenian Service.

“Kommersant” states that the foreign ministers of both Armenia and Russia spoke with optimistic emphasis on regional developments, including the normalization of Armenian-Azerbaijani and Armenian-Turkish relations. At the same time, the article added, experts in both Yerevan and Baku do not share that optimism, saying that during recent efforts for the Armenian-Azerbaijani conflict settlement, initiatives have failed many times.