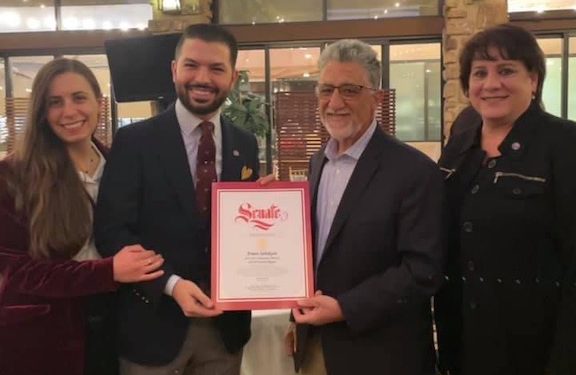 The Armenian National Committee of America – Western Region’s Armen Sahakyan ends his tenure as the executive director after nearly three years, as he and his wife repatriate to Armenia. Sahakyan will continue to remain engaged with the organization in a consulting capacity.

“It’s been my honor to serve the Armenian-American community with the ANCA these last 13 years,” remarked Sahakyan. “From a local activist to a fellow to an executive director, I have worked alongside incredible individuals who fight tirelessly every day for our community. Thank you in particular to the ANCA-WR Board of Directors, staff, committee members, and volunteers for their trust and productive collaboration over the past three years. I wish the organization continued growth and success in service of the Armenian Cause.”

Sahakyan’s tenure as the executive director coincided with the devastating 44-day war, as well as the ongoing COVID-19 pandemic; the organization promptly responded to both crises deploying all available resources to contribute to the safety and wellbeing of the community and the Homeland. This period also marked the historic recognition of the Armenian Genocide by the U.S. House of Representatives, U.S. Senate, and the U.S. President – a policy priority long pursued by the ANCA. Additionally, the ANCA-WR deepened relations with a number of coalition partners, substantially increased media engagement, and implemented civic education initiatives.

“The ANCA Western Region has been truly fortunate to have Armen Sahakyan as its Executive Director especially during these last few years filled with triumph as well as crises. We are proud of his achievements and applaud his enviable decision with his wife Talin to repatriate to the Homeland. While his departure is certainly a loss for us, his move will be Armenia’s gain, and we eagerly anticipate his continued work and further accomplishments in service to the Nation.”

The ANCA-WR Board of Directors hosted a farewell reception on October 14 during which they presented Sahakyan with a commemorative plaque. California State Senator Anthony Portantino and Los Angeles County Supervisor Kathryn Barger’s Chief of Staff Anna Mouradian also presented certificates of appreciation. On October 27, at the end of a reception honoring State Minister of the Republic of Artsakh Artak Beglaryan, Armenia’s Consul General to Los Angeles Ambassador Armen Baibourtian presented a Certificate of Appreciation to Sahakyan for his many years of dedicated service and effective cooperation with the Consulate.