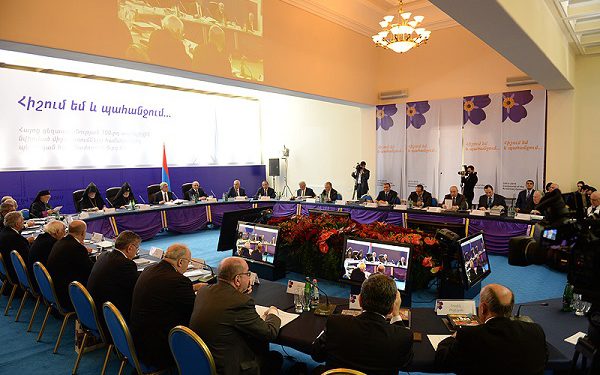 Sarkisian said that some countries are going to send governmental delegations. Others will attend the events to be organized by local Armenian communities.

The Armenian President believes that the scale of the events and the number of those present are especially important now that Turkish President Recep Erdogan has appeared with a cynical and short-sighted invitation to attend the celebrations of the 100th year of the Turks’ victory in the Battle of Gallipoli.

“They say that in politics all means will do, but in this particular case Ankara has harmed its own self. Once I received that indecent invitation, I hurried to publicly respond to it so as to prevent any improper comments from international mass media. I think my response and the reaction of the Turkish society have proved that it was an injudicious initiative,” Sarkisian said.

He believes that Erdogan’s invitation was as unjustified as are all forms of denial. “Denial is not only a complex of political incompetence but also a legal category. It turns the present-day Turkish authorities into accomplices to the horrible crime committed by their predecessors,” the Armenian President said.

The President also pointed out that on Jan. 28, Turkey was denying the Genocide at the European Court of Human Rights (ECHR), when it tried to present the case of the criminal nationalist repeatedly convicted in Turkish courts, Dogu Perincek, as the Court’s legal view of the Armenian Genocide. Sarkisian said that Armenia is participating in the hearing as a third party. The Grand Chamber of the ECHR will decide whether the Swiss legislation on Genocide denial complies with the European Convention on Human Rights.

“This is an important verdict for us, because we are sure that Genocide denial is a possible signal for reoccurrence of such crimes. In the meantime, we do not think that the Perincek case is about legal recognition or denial of the Genocide. As people, who suffered from the Genocide, we have never applied to court because we don’t consider it to be an issue of the ECHR’s jurisdiction; however, Turkish propaganda will present it as its own victory in any case,” Sarkisian said. The President noted that the Turkish side did not even hesitate to release Perincek from prison or permit his departure so that he could be present at the ECHR’s session.