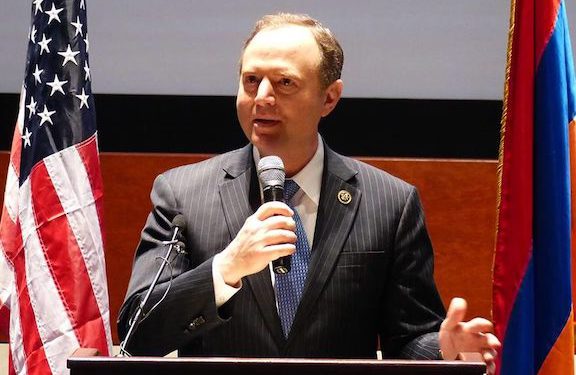 Representative Adam Schiff (D-Calif.) called on the Biden administration on Thursday to take every possible diplomatic action to ensure the release of Armenian prisoners of war currently being held captive in Azerbaijan.

Schiff’s statement on Thursday was to announce that through his and other Congressional Caucus members’ efforts $52 million in funding has been secured for Armenia and Artsakh.

“After a year marked by devastating conflict and incredible suffering, we have been able to secure more than $52 million in funding for Armenia and Artsakh in the recently introduced House Foreign Affairs spending bill, along with the other co-chairs of the House Armenian Caucus,” Schiff said on Thursday in a Facebook post.

Schiff explained that “this robust investment will support democratic, economic, and energy reforms in Armenia and provide urgent humanitarian relief in Artsakh.”

“But our work is far from done,” said the Congressman. “We must continue to push the Biden administration to take every possible diplomatic action to end Azerbaijani aggression and secure immediate release of all Armenian detainees and prisoners of war, some of whom have been tortured in violation of international human rights conventions.”

“And we must also continue to push President Biden to withhold U.S. assistance from the Aliyev regime in Azerbaijan, which continues to commit grave human rights abuses and threaten the independence of Armenia,” he added. “I will always stand with the people of Armenia and Artsakh. Always,” Adam Schiff said.

In a similar social media post on June 25, Schiff said “Azerbaijan’s continued violation of human rights following the conflict in Nagorno-Karabakh is unacceptable.”

“While we continue working to secure the immediate release of Armenian prisoners of war, the United States must impose harsh consequences on Azerbaijan and end the waiver that has allowed U.S. military assistance to flow to the regime in Baku. We must not allow Azerbaijan to violate human rights and trample on international norms with impunity,” explained the Congressman.