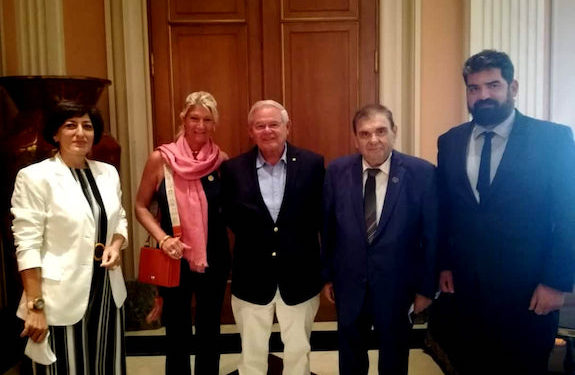 Senate Foreign Relations Committee Chairman Robert Menendez and his wife, Nadine, met with the President of the European Armenian Federation for Justice and Democracy (EAFJD) Kaspar Karampetian and Greek Armenian community leaders during the his visit to Greece, reported the Armenian National Committee of America.

Karampetian, who is a native of Greece, and the Armenian delegation thanked Senator Menendez for supporting expanded aid to Artsakh/Armenia, zeroing out military aid to Azerbaijan, and for his decades of proactive leadership that led to the 2019 unanimous U.S. Senate recognition of the Armenian Genocide.

Karampetian also briefed Menendez on the efforts of the ANC of Greece and EAFJDu to bolster the security and safety of Artsakh and Armenia, as well as work to strengthen ties with Europe.

During his visit to Greece, Menendez is scheduled to meet with a series of Greek officials, including Prime Minister Kyriakos Mitsotakis to review a broad range of shared U.S.-Greece policy priorities.