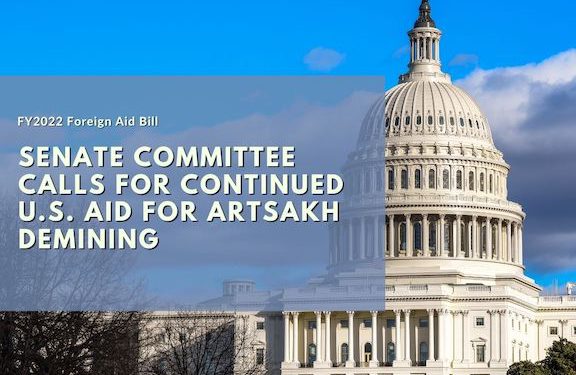 “The Committee recommends up to $2,000,000 for humanitarian de-mining and UXO clearance activities in areas affected by the 2020 fighting in the Nagorno-Karabakh conflict, subject to prior consultation with the Committees on Appropriations,” stated the report accompanying the Senate FY2022 foreign aid measure.  It went on to note that “the Committee remains concerned with the protracted conflict between Armenia and Azerbaijan, and requests the Secretary of State to consult with the Committees on Appropriations prior to obligating assistance made available under title IV of the act for Armenia and Azerbaijan.”

“We are deeply troubled that to date USAID has provided only $2.5 million in new aid to meet the needs of the 100,000 Armenians displaced from their indigenous Artsakh homeland by an Azerbaijani army which has received over $120 million in U.S. military assistance,” said ANCA Executive Director Aram Hamparian. “Armenian American will continues to work with Appropriations Committee members to expand life-saving U.S. assistance to Artsakh while demanding the enforcement of Section 907 restrictions to end U.S. support for Azerbaijani aggression.”

Pro-Armenia and Artsakh advocates can urge their U.S. Senators and Representative to zero out military aid to Azerbaijan by visiting

The Senate’s proposed FY2022 foreign aid measure, for the fifth consecutive year, blocked any U.S. arms to President Erdogan’s elite bodyguard unit, which, under Erdogan’s orders, brutally beat peaceful U.S. protesters in Washington, DC on 2017.  Senators also called on the “Government of Turkey to immediately release the remaining locally employed U.S. Embassy employee, and to dismiss the false charges against him and two other locally employed staff whose cases are on appeal.”  The Committee went on express its concern about “widespread arbitrary detention and abuse of the judicial process in Turkey, as well as reports of torture and other mistreatment of detainees.”

The U.S. House version of the FY2022 foreign aid bill, adopted on July 28th, calls for not less than $50 million in U.S. assistance to Armenia, “for economic development, private sector productivity, energy independence, democracy and the rule of law, and other purposes.”  It urges not less than $2 million for de-mining activities in Artsakh.  The recommendation for U.S. assistance to Armenia is over twice that requested by President Biden in his FY2022 proposed budget, which remains silent on U.S. assistance to Artsakh.  It also includes an ANCA-backed amendment, led by Congressional Armenian Caucus Co-Chair Frank Pallone (D-NJ), which restricts U.S. foreign military financing and training assistance to Azerbaijan.

The ANCA shared its FY2022 Armenia and Artsakh assistance priorities with Senate and House Appropriations Committees earlier this year.