by Contributor
in In Memoriam, Latest, News, Top Stories
0 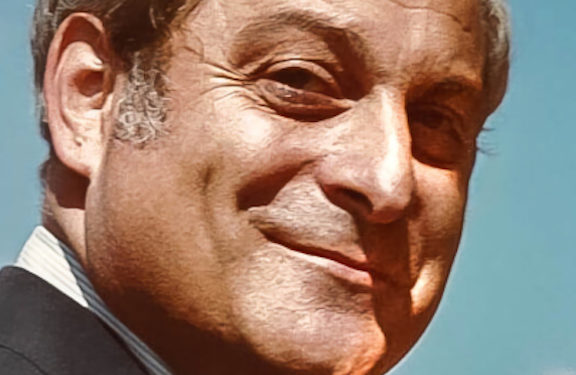 He was born in Atlantic City in 1930 to Julia and Charles Momjian, both orphaned refugees from the Armenian Genocide who were raised by American missionaries. Charles died at an early age and the family, which included younger brother Albert, had a difficult time during the Depression era.

Momjian attended Atlantic City High School, LaSalle College and Charles Morris Price School of Advertising. After school, he joined the Army, where upon learning that the platoon photographer would have his own private quarters, spent a weekend learning all he could about photography. Returning to Atlantic City, he used this skill again, as the official photographer for the Miss America pageant.

He began and ended his long professional career at Ford Motor Company, including years as a marketing executive at Philco-Ford, Ford Aerospace and ultimately as a Washington liaison for the company.

Momjian is best known and remembered for his dual passions of antique collecting and politics. A serendipitous find of an old gun under the Atlantic City boardwalk when he was a young boy inspired his lifelong love of antiques. During a 1987 interview about his collecting on the Today show, he said “collecting is in the marrow of my bones.” His son Chris said his father “spent every free minute he had digging through stalls at flea markets, talking with dealers at antique shows or attending auctions. I’d go along with him, leaving before dawn; my ‘reward’ at the end of the long day was usually an antique pocket knife for my collection.”

Early in his collecting career, following advice from the Grolier Club, he pursued first edition books, but his obsession quickly expanded into other areas, as he built his Americana collection that spans genres from soda fountain fixtures and coin-op machines, to rare historical manuscripts and early photography. He is nationally known for his collection of White House and presidential china, much of which has been on loan to presidential libraries. Mr. Momjian loved sharing his passion for collecting with others and was in demand as a speaker many groups throughout the country. Today objects from his collections are on loan to numerous museums and historic sites.

A chance encounter with Jimmy Carter during his presidential campaign led to decades of service and advice to presidential campaigns and Presidents from both political parties. Mr. Momjian served the Carter Campaign as Director of Special Projects. Merging his passion for art and politics, he worked with modern artists including Andy Warhol and Roy Lichtenstein, commissioning artwork to be sold to raise funds for the DNC. Through the sale of the Inaugural Impressions portfolio, funds were raised to keep the DC museums open late for visitors to the nation’s capital. Following the election, President Carter nominated Momjian as a U.S. representative to the United Nations with the rank of ambassador, the first person of Armenian descent to hold the position. He later served as a delegate to the UN Commission on Human
Rights in Geneva and chairman of the DNC’s Ethnic-American Committee.

He supervised Presidential gifts to heads of states, often combining a special printing of a presidential speech presented in a fine binding. He had miniature Liberty Bells cast from an old chip from the crack in the original bell and presented one to the Queen of England when she visited Independence National Historical Park on America’s Bicentennial. He made sure there was always American art in the White House, often lending works from his own collections.

In 1981 President Reagan nominated Momjian as the only non-Jewish member of the U.S. Holocaust Memorial Council. As an original member of the Council, he was very proud of his work in developing the U.S. Holocaust Museum. During the terms of George H.W. Bush and Bill Clinton he continued to work on special projects for both Presidents, the preservation of the collections at the White House and the restoration of the Eisenhower Executive Office Building.

Over the years Momjian served on many non-profit boards; among them the Ellis Island Restoration Commission, Balch Institute for Ethnic Studies, African-American Museum, National Holocaust Museum, International League for Human Rights, the Liberty Museum, First Ladies Library, Capitol Children’s Museum, Brandywine Museum and the National Symphony Orchestra. He was a member of the Library Company of Philadelphia, Poor Richard Club, the Union League of Philadelphia and the Huntingdon Valley Country Club.

He is survived by his wife of 61 years, Joan (Reed), sons Bruce (Christine) and Christopher (Gail) and six grandchildren. Arrangements will be private; memorial contributions may be made to the Armenian Martyrs’ Congregational Church, Havertown, PA or the Armenian Missionary Association of America, Paramus, NJ.