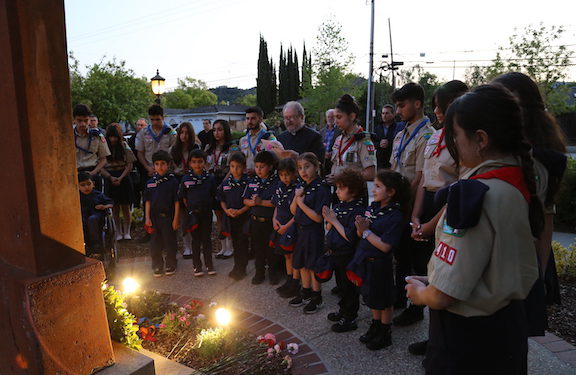 Homenetmen Ani Scouts with Fr. Datev Harutyunian at the Khachkar

On a beautiful Spring evening, St. Andrew Armenian Apostolic Church community commemorated the 107th anniversary of the Armenian Genocide with a memorable tribute to our ancestors in Silicon Valley.

Emceed by Tamar Grigoryan, the program kicked off with flag ceremony led by Homenetmen Santa Clara Ani Chapter Scouts. National anthems of the United States and Armenia were performed by Benjamin Choupak.

After the opening prayer, offered by Archpriest Fr. Datev Harutyunian, Ani Yeni-Komshian introduced honorary guest Congressman Ro Khanna, who serves on the Armenian caucus and is a staunch supporter of Armenia. “The world needs to remember that barbarian behavior took place 107 years ago. We are sadly reminded today of the atrocities of the past. We need to be teaching the human cost of the Armenian Genocide,” said Khanna.

A powerful message was delivered by Karin Yeni-Komshian, an American Armenian. “I’m fortunate to live in the safety and security of America,” said Yeni-Komshian. “I can’t believe I’m witnessing the continuation of aggression against Armenia. Azerbaijan’s aggression of Armenians in Artsakh and border villages of Armenia is deplorable. We have a quest for justice and, as a result, need to correlate history with justice. These actions have enabled other 20th century genocides – Rwanda, Darfur and many others.”

Frustrated by the U.S. governments indifference to Armenia while being assaulted by Azerbaijan, Yeni-Komshian asked, “Why the double standard by the current administration?” Addressing her American-Armenian identity, she noted that, “This duality has given me strength and an advantage.”

“We must be engaged as US citizens and Armenians to help our country and Armenia,” said Yeni-Komshian. “We need to keep the Armenian diaspora alive by engagement—identity, culture and faith.” She concluded by asking us to participate in church, community, and language learning. “Armenia is experiencing an existential threat and each of us should to reflect on how we will help our community.”

Next, a stirring version of the poem “Ancient Country” was delivered by Anahit Tonoyan.

Keynote speaker, author and professor Taner Akçam asked us all an important question: “What has happened in America after the recognition of the Armenian Genocide? What will replace it as a rallying cry for Armenian’s outside Armenia?” Then he exclaimed, “There is a need for a new conversation.”

“What exactly is recognition? Is it just lip service? Things have to change,” said Akçam. He explained that, in a civilized society, historical injustices need to be remembered as to not repeat themselves.

According to Akçam, “President Biden’s recognition of genocide will not change a thing. We must understand denial and recognition. Denial is not just about an ideological attitude. It is impossible to disconnect denial from current policy creation. Turkey must reverse its policy of denial. Like apartheid in South Africa, and slavery in the U.S., denial fuels the aggression of Azerbaijan on Armenia. History is not something in the past. The past is the present. If democracy, peace and security are truly priorities, things must change.”

Akçam concluded his remarks by emphasizing that there is no guarantee of success and that the path would be long. “The campaign for recognition was long and arduous. The campaign for reparations will be no shorter or less complex,” he said.

Next, we listened to a stirring performance of “Garun A’ by Komitas. It was was performed by skilled composers, as well as guitarist Pardy Minassian. Her performance was accompanied by spoken work.

Community member and longtime supporter Supervisor Joe Simitian spoke took to the podium to speak next. Simitian has gained notoriety for focusing on keeping our community safe. Over the past three decades, he’s engaged in pro-Armenian bills as a member of California State Assembly.

“It’s time for a new conversation…we are awfully tired after 107 years,” said Supervisor Simitian. “I will take the professors invitation to start a new conversation and it will begin tonight. Recognition is important for no other reason that it is the truth. Any other word is at best a half-truth or un-truth, or candidly, a lie. I think that matters.”

Vice-Mayor Liang Chao, who was noticeably moved by the program, expressed that she was touched to witness, after 107 years, the survivors of the genocide.

Our next musical interlude was simply magical. Songs “Kilikia” and “Hyots Hovig” were sung by Dr. Lori Panossian, accompanied on piano by Alla Petrosyan. “Kilikia” begins with the stirring words, “When doors of hope are opened wide, and dreary winter flees away. Our beauteous Armenia beams forth in glad and smiling day… I yearn for Kilikia, the land where first I saw the light.”

Krikor Krikorian, leader of the South Bay Commemoration committee and Vice Chairperson of Homenetmen Ani Chapter expressed his thanks to the speakers and participants of the event, noting the dedication of the South Bay committee. “We must never give up and demand rights for our ancestors,” said Krikorian.

The evening concluded with a prayer and the placing of flowers around the Khachkar.