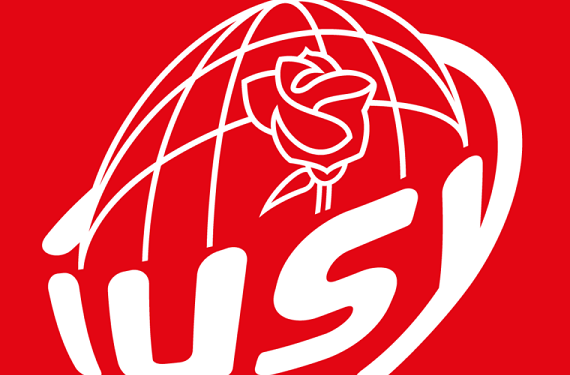 VIENNA—The biennial International Union of Socialist Youth (IUSY) World Congress took place on June 18 and 19 in a hybrid format that included a digital component for the first time.

Delegations from around 60 organizations including the Armenian Youth Federation participated in the World Congress.

During the meeting, the governing body of the IUSY presents a report of their past activities, works to formalize a plan for the upcoming two years, and a new leadership is elected.

For the first time through the efforts of the delegation from the Armenian Youth Federation, a resolution recognizing the independence of the Artsakh Republic was passed with 82 delegates voting in support, 18 abstentions and 0 against.

The AYF delegation was represented by Meline Matossian of the ARF Youth Nor Serount of France and Sarineh Abrahamian of the ARF Bureau Youth Office.

The World Congress concluded with the election of a new governing body, in which AYF delegate and ARF member Sarineh Abrahamian was elected Vice-President of the IUSY. To date, about 145 socialist democratic and workers’ organizations from more than 100 countries are members of the IUSY. The AYF is a full member of the IUSY.

Below is the complete text of the Artsakh recognition resolution

On September 27, 2020 Azerbaijan started a large-scale and unprovoked attack against Artsakh (Nagorno-Karabakh) and Armenia. Azerbaijan waged a war during a global pandemic, against the call of the United Nation’s Secretary General for a global ceasefire.
These attacks are in direct violation of the ceasefire signed by Armenia, Artsakh, Azerbaijan in 1994.

With the support of Turkey, the war continued to escalate with indiscriminate bombings of civilian areas, attacking schools, hospitals, and churches. Turkey has publicly declared its support and continued providing military assistance to Azerbaijan. Alarming for regional stability, Turkey had also facilitated the participation and provision of Syrian mercenaries, along with its own Special Forces, to join the war against Artsakh.

This has resulted into thousands of casualties, including many civilians. More than half of the population of Artsakh had been displaced and made their way to Armenia to seek refuge. Armenian prisoners of war have been brutally tortured and murdered.

On November 9, 2020 a trilateral agreement was signed between Armenia, Azerbaijan and Russia completely ignoring the rights of the Artsakh people, but also the OSCE Minsk Group as the legitimate body that is entitled to resolve the conflict.

Taking into consideration,
that this agreement does not safeguard the rights of the people of Artsakh;

does not grant a legal status to the Republic of Artsakh;

does not offer a sustainable solution to the conflict;

that the reports of the European Commission against Racism and Intolerance of the Council of Europe (ECRI) and of the UN Committee for the Elimination of Racial Discrimination (CERD) attest to the impossibility of the Armenian populations to live freely in Azerbaijan;

that the security and freedom of the Armenian populations of Nagorno-Karabakh are not guaranteed by the Republic of Azerbaijan;

that the unprecedented aggression of Azerbaijan and Turkey is a consistent threat to the right of self-determination of the Armenian people of Artsakh;

that Azerbaijan keeps displaying extreme Armenophobic behavior by creating a park where the suffering of Armenians is displayed to the youth.

IUSY strongly condemns the use of Syrian mercenaries by Turkey.

IUSY calls for the international recognition of the independent Republic of Artsakh.

As an internationally recognized progressive entity which values human rights and stands against all kind of crimes against humanity, we deem it important that IUSY displays these values by taking concrete steps.

That is why we call on IUSY to,
address a letter to the OSCE Minsk group as the only legitimate and legal body to reestablish the peaceful negotiations to the Artsakh conflict.

address a letter to the UN to urge Azerbaijan to release the Armenian POW’s and hostages according the cease fire agreement.

address a letter to the UNESCO to urge them to take necessary steps to preserve the Armenian cultural heritage that is now under Azerbaijani occupation.