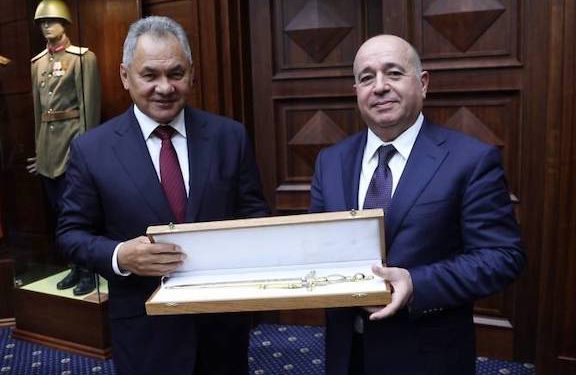 Russia's Defense Minister Sergey Shoygu presents a sword to his Armenian counterpart Arshak Karapetyan on Aug. 10, saying that Russia's arm supply to Armenia had kicked off

“I would like to direct your attention to the fact that we have established respective relations with both Armenia and Azerbaijan. In this particular case, the Russian side takes into consideration the necessity of power balance in the region,’’ Zakharova said.

She also called on Armenia and Azerbaijan to eliminate the existing divisiveness in the humanitarian field as soon as possible, to exchange prisoners of war with the “all for all” principle, and maps of minefields.

In an interview with CNN Turk, Aliyev essentially threatened war. But, he was outraged at Russian Defense Minister Sergey Shoygu who, during a visit to Yerevan, presented his Armenian counterpart, Arshak Karapetyan with a sword and said: “We can consider that the arms supply process to Armenia has kicked off.”

In a related matter, President Vladimir Putin of Russia briefed his French counterpart Emanuel Macron about the implementation of the November 9 agreement, which ended military operations in Karabakh.

Putin told Macron that the situation in the region is generally stable, adding that efforts are underway to unblock economic and transport communications and meet the humanitarian needs of the people in the South Caucasus.