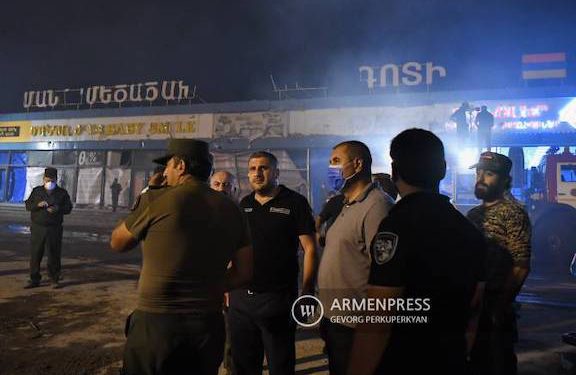 People gather in front of the Surmalu shopping center

YEREVAN (Azatutyun.am)—The director of a Yerevan market where an apparent fireworks warehouse explosion last Sunday killed more than a dozen people has denied any breach of fire-safety regulations.

A fire inspection body, however, insisted after the incident at Surmalu, a sprawling shopping center just off downtown Yerevan where at least 16 people were killed and 61 injured in a massive fire triggered by the blast, that two dozen violations identified during an inspection conducted in the spring of 2021 had not been eliminated by the market’s administration.

Talking to RFE/RL’s Armenian Service briefly on the phone on Tuesday, Irina Madatova, the manager of Surmalu, asserted that they did eliminate the violations. She did not elaborate.

The fire inspection body said it gave Surmalu until the end of last year to comply with city planning norms and fire-safety rules at an area of more than 3,000 square meters. After that, no new inspection was carried out, it added.

Vardan Tadevosyan, a spokesperson for Armenia’s Investigative Committee, said that about two dozen people, most of them survivors of the fire, have been questioned so far. He did not say why no one from the managers of Surmalu or the owner of the market have been interrogated. According to the official, there are still no suspects or accused in the criminal investigation launched after the explosion.

“Most of the interrogated are tenants who themselves suffered in this incident. The identities of owners of pavilions operating in the territory of the shopping center are being clarified,” Tadevosian said.

Investigators together with experts are also examining the scene of the explosion and fire, he added.

“I don’t think that investigators can report information so quickly about what caused the explosions, as search and rescue work is still ongoing on the scene,” the spokesman for the Investigation Committee said.

While it is still unclear what exactly caused fireworks at Surmalu’s warehouse to detonate, Armenia’s Minister of Emergency Situations Armen Pambukhchyan told reporters on Monday that authorities “practically ruled out” terrorism as a cause of the incident.

“Watching the footage of the explosion, we almost rule out such a theory [that a bomb had been planted], because first there was smoke, then fire covering some small area, then came an explosion,” he said. “Quite a large amount of explosive materials was stored there.”

Razmik Zakharyan, an 86-year-old businessman and former politician who owns Surmalu, was not available for contact immediately.