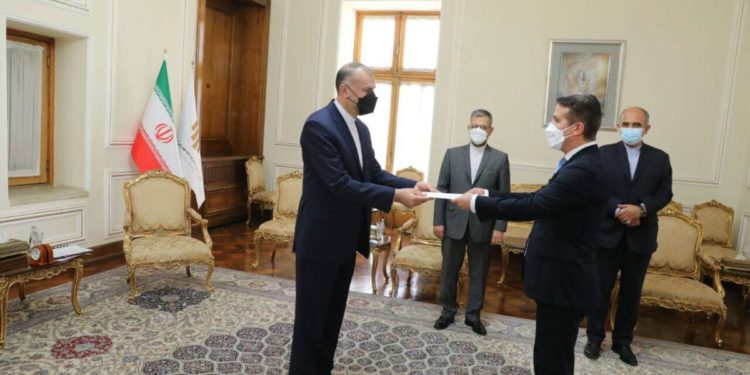 Iran’s Foreign Minister expressed his country’s dissatisfaction with the manner in which Azerbaijani border guards have treated truck drivers from Iran, including the arrest of two Iranian drivers on the Goris-Kapan Highway. He also called “unfortunate” the recent “anti-Iran” remarks by Azerbaijan’s President Ilham Aliyev.

Relations between Baku and Tehran have become bumpy ever since Azerbaijani forces, having set up road blocks on the Goris-Kapan Highway in Armenia’s Syunik Province, have been stopping Iranian commercial trucks and imposing high taxes on the drivers. Earlier this month, two Iranian truck drivers were arrested. The road blocks have impeded Iran’s trade with Armenia.

Citing Iran’s “emotional response” to the highway debacle, Aliyev told the Turkish Anadolu news agency this week that he was angry and surprised at Iran’s decision to hold military drills in the country northwest region, bordering Nakhichevan.

Amir-Abdollahian characterized Aliyev’s remarks as “anti-Iran,” and said that it was unfortunate and surprising that the Azerbaijani leader would make the statements.

He defended Iran’s right to hold military exercises as the country’s sovereign right, saying that the drills are meant to train its armed forces to ward off potential attacks by Israel.

In a separate announcement on Thursday, the commander of Iran’s ground forces General Kioumars Heydari told the ISNA news agency that the drills in question will be held on October 1 in the country’s northwest region.

He explained that the drills, called Conquerors of Khaybar, will involve artillery, armored equipment, drones and helicopters.

Heydari added that the purpose of the drills is to check and increase the combat readiness level of the military and test military equipment.