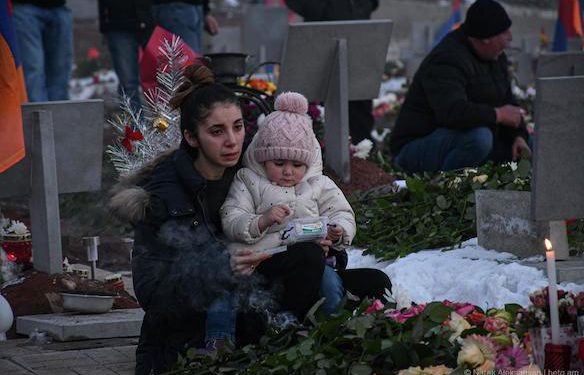 A mother and her child visit a gravesite at Yerablur Military Memorial Cemetery. Photo credit: Hetq.am

… a time of cataclysmic absurdity, when connections were broken, when the unspoken had to be spoken, a list of grievances made, inner dialogues pivoted.

… a time when people were so deep inside their heads, that the only showing and telling were screens of all sizes and awkward Zoom and FaceTime dialogues.

… a time when the human spirit was in shock, when salt continued to be poured on open wounds, and we suffocated amidst catastrophic losses for the Armenian nation and humanity.

… a time when thousands of our promising sons, daughters and the generations of their never-to-be progeny were pulverized on our ancestral homelands, leaving their loved ones and unaccounted masses in trauma.

… a time when there were no Schindlers among us, and our heads were all pointed downwards.

… a time when our millennia-old existence and cultural longevity were being threatened, when Komitas, St. Gregory of Narek, and Mesrop Mashtots were still on a Neanderthalian kill list, when our history was being rewritten as “Albanian.”

… a time of grief, tears when even the duduk master tired of our sad songs and went home, a time like no other in modern history.

… a time when the sun was scorching the Earth more than ever before, forests were burning, asphalt melting, pollution seeping into our lungs, competing with the virus to take us down.

… a time when the tundra and the Arctic were on fire and disappearing, when Europe and Asia were flooding and simultaneous earthquakes rattled our nerves.

… a time when hope was in cardiac arrest, on a ventilator.

… a time of the once-in-a-century pandemic, when so many vibrant voices and life forces were silenced forever, when the delta and the delta+ were threatening to show us the Alpha and Omega.

… a time when personal beliefs and science were at odds, putting unvaccinated communities and populations in harm’s way.

… a time when rioters were on the streets, overtaking Capitol Hill, when looters destroyed the Grove and breached our grocery stores and pharmacies.

… a time of upheaval in faraway places like Cuba and South Africa, a time of extreme poverty, homelessness and mass continental migration, all while billionaires became gods and flew into space.

… a time of gloom, when we were all buried in a pit, isolated, questioning our collective agendas, our identities.

… a time when our narcissism automatically made us ghost each other, ignore texts and calls and gaslight whomever we could to achieve whatever unearthly personal gain or ungodly pleasure.

Then came a birth in our family, a new breath, a new voice and hope amidst death and chaos.

An Armenian with Viking blood was born, my grandnephew joining newborns in all corners of the world, born in the age of the Corona to resurrect our humanity.

Layers of muck and pathology are peeled away when the focus in life becomes nursing and successfully burping an infant. The cries, diaper changes, angelic hours of sleep and endless photos and snaps allow us to forget the triviality of us, who we are, how we look, how we dress, what we eat, how we are perceived and our standings in society.

Newborns come to a new Earth to join other children and give adults a spiritual and intellectual renaissance. They come to us as sirens of hope — crying out a new canvas, a new humanity. They unleash their new spirits to make us new again, to allow us to start all over again.

How do we recast this movie, rewrite our dialogue, allow the triumph of the broken human spirit?

Let’s not be so fast to throw away our opportunity to continue to live on this planet, to survive the pandemic, to survive our enemies. Let’s not throw each other under the bus for personal and political gain, for sheer ego-driven, tone-deaf righteousness, because we’re destroying not just our lives, but our communities, our nation, and all prospects of a future.

Let’s not allow any government, church, organization or political party — formed under our identity — victimize, derail, impoverish us in the name of our people and for the “collective good.” There is no collective, no communion, when at least one of us is marginalized, cast aside, disfranchised, banished, sickened or sent to our deaths.

Reality is clearly not working for us, because our extinction as a people and a human race are already being foreshadowed in some history books, in our movies and in our nightmares. We, Armenians, may not survive long enough to make it into our sixth millennium.

Perhaps we need to rethink what is important, just so that we can survive.

And three apples fell from heaven: one for the storyteller, one for him who made him tell it, and one for you the reader.

Paul Chaderjian is a broadcast journalist at Al Jazeera. He has worked for ABC News in New York, at the ABC station in Hawaii and at the NBC, CBS and FOX affiliates in Fresno. He is also the author of “Letters to Barbra,” a novel. He may be reached via Twitter @dohaPAUL