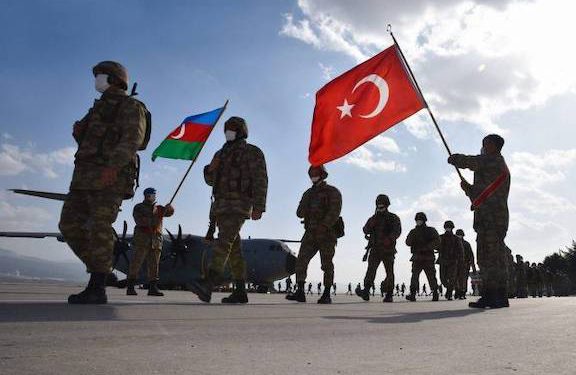 Soldiers of the Turkish and Azerbaijani armed forces

The Turkish military has set up a command center for its special forces in Baku, reported the Ermenihaber news site on Friday, citing Azerbaijani sources.

Azerbaijan’s defense ministry has not commented on the Baku command center.

The move comes a week after the Turkish and Azerbaijani militaries held drills in the occupied areas of Artsakh Kashatagh (Lachin). Using live ammunition and deploying heavy military equipment, the Azerbaijani Defense Ministry said the drills were aimed at enhancing the combat readiness of troops in both armies.

The military exercises, so close to civilian areas in Artsakh and the border with Armenia, were said to be part of a military cooperation agreement between Ankara and Baku signed in Shushi in June, when Turkish President Recep Tayyip Erdogan visited the occupied city along with his Azerbaijani counterpart Ilham Aliyev.

Armenia’s Foreign Ministry condemned the exercises, warning that Azerbaijan and Turkey were destabilizing efforts to establish peace and security in region.

Earlier this year, Turkey opened a military base in Aghdam in a joint effort with Russia. At the time it was reported that the base will be used to monitor peacekeeping operations in Artsakh.