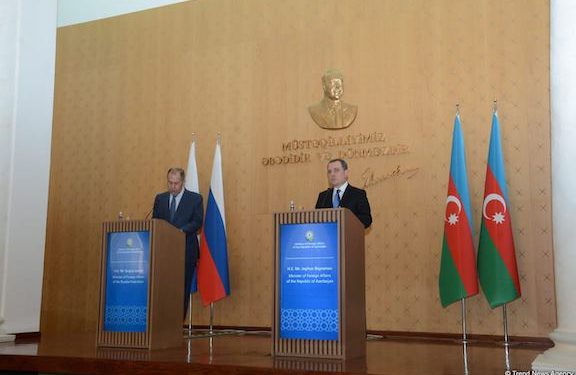 The issue of reopening of transport routes between Armenia and Azerbaijan is being resolved based on the interests of all interested parties, including Russia, Turkey and Iran, Russia’s Foreign Minister Sergey Lavrov said on Tuesday in Baku.

The Azerbaijani Trend news agency reported that Lavrov said that the working group tasked with this matter is working to identify concrete ways to unblock transport and economic ties, which will allow the “South Caucas states to create a single logistic space together with their neighbors.”

An agreement reached on January 11 in Moscow between the presidents of Russia and Azerbaijan and Armenia’s prime minister, established a three-member commission to work on “unblocking” transport ties between Armenia and Azerbaijan—one of the points of the November 9 agreement.

Armenia has pressed Russia for the release of more than 200 prisoners of war being held captive by Azerbaijan, which insists that it has returned all captives and has labeled those still in captivity as terrorists, against whom criminal charges will be filed.

A new approach from official Baku in delaying the return of POWs is that Yerevan has failed to provide exact locations of mines in Karabakh and allegedly has refused to return captives from the first Karabakh War. Armenia’s foreign ministry last week clarified that it has returned all Azerbaijani captives, including two people who were sentenced for the murder of a 14-year-old boy several years ago.

Lavrov also doubled down on the matter of opening the Armenia-Azerbaijan border when he visited Yerevan last week. After talks with Armenia’s foreign minister Ara Aivazyan Lavrov stressed the importance of Russian efforts to get Armenia and Azerbaijan to open their transport links, emphasizing its importance for the resolution of all other issued related to the conflict.
“The success of this work [opening transport links] will be decisive for normalizing the overall situation and laying the groundwork for creative cooperation in the post-conflict period,” said Lavrov during a joint press conference with Aivazyan last week in Yerevan.

He further added that Armenia and Azerbaijan are now also engaged in a demarcation and delimitation of their internationally recognized border. According to Azatutyun.am Armenian officials have repeatedly made statements to the contrary.

“We highly appreciate the work of the trilateral group who are working very productively and we have every reason to believe that in the near future we will receive the first results of its work,” said Lavrov on Tuesday in Baku.

Azerbaijan’s Foreign Minister Jeyhun Bayramov said that from an economic point of view, the opening of transport routes will benefit not only Azerbaijan and Armenia, but also other countries of the region, which makes the process of peaceful settlement of Karabakh conflict irreversible.

“We should pay more attention to this clause of the agreement. I am sure that in the near future there will be a concrete decision and we will see the start of work on a number of routes. A lot of preparatory work was done, I do not want to name specific routes so as not to create additional tension for someone, but taking into account the results of the monitoring group, which was sent by the Russian partners, they studied the situation along certain routes in Azerbaijan and Armenia,” said Bayramov.

The working group is co-chaired by Mher Grigoryan from Armenia, Alexey Overchuk from Russia and Shahin Mustafayev of Azerbaijan. It has already had several meetings. One of its tasks is to take stock of international treaties concluded within the CIS and with third countries on the implementation of transportation in the region and ensuring appropriate control.

The rail and road links between Azerbaijan’s exclave Nakhichevan and the rest of Azerbaijan are to pass through southeastern Armenian province of Syunik. Armenia is supposed for its part to use Azerbaijani territory as a transit route for cargo shipments to and from Russia.