Turkish-Azerbaijani Aggression Against Artsakh Is Not a Religious Conflict 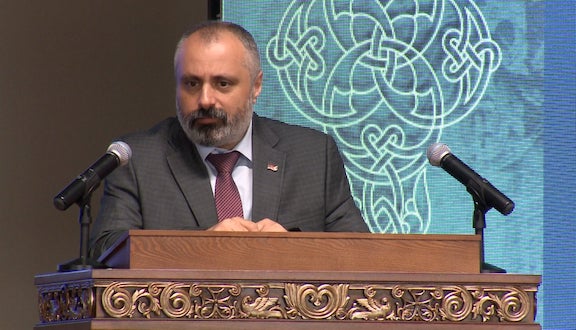 The Azerbaijani-Karabakh conflict and the aggression unleashed against Artsakh by the Turkey-Azerbaijan alliance, must not be categorized as a religious conflict, said Artsakh Foreign Minister David Babayan on Friday, saying the conflict has been fueled by hatred toward Armenians.

He highlighted the need for inter-religious dialogue, saying it is an effective means to settle conflicts peacefully and confront ongoing extremism in xenophobia.

Babayan was speaking at the International Religious Freedom and Peace conference organized by the His Holiness Karekin II, Catholicos of All Armenians, which kicked off on Thursday.

The Artsakh Foreign Minister briefed the conference participants on the current developments on the ground in Artsakh and the situation created as a result of the war unleashed by Azerbaijan and Turkey—with the participation of international terrorists—and emphasized the ongoing destruction of Armenian historic and cultural monuments by Azerbaijan.

Taking place at the Holy See in Etchmiadzin, the conference aims to shed light on religious persecution and highlight religious freedoms as a catalyst for peace.

Access to places of worship in conflict zones, protecting religious and ethnic minorities, and preserving cultural heritage, are just some of the topics that were addressed during the conference.

The conference has brought together high-ranking religious leaders, renowned scholars and experts from around the world to discuss issues related to international religious freedom and preservation of the world’s spiritual, cultural and historical heritage, which all too often come under threat from ethnic and religious intolerance, especially during wars and armed conflict.

The conference will develop recommendations to bolster international religious freedom and cultural preservation that can be applied globally.