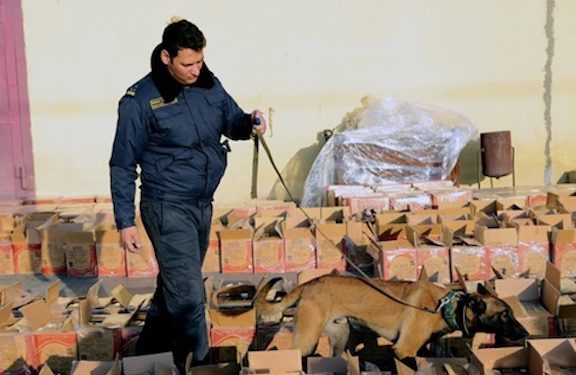 YEREVAN (Azatutyun.am)—Law-enforcement authorities in Armenia have arrested a Turkish citizen accused of smuggling 97 kilograms of heroin from neighboring Iran.

The State Revenue Committee (SRC) said on Friday that the Class A drug was hidden in a truck driven by the unidentified man and searched by law-enforcement officers at a customs checkpoint on the Armenian-Iranian border.

It released a video that shows plainclothes officers pulling plastic boxes out of makeshift metal containers attached to a truck body. The SRC said they found 119 such packs filled with heroin.

“The market value of the confiscated narcotics varies from $10 million to $11 million,” said Vartan Vartanian, the head of the SRC’s anti-smuggling unit.
Vartanian indicated that more arrests could be made soon as a result of what was the second massive seizure of heroin reported in Armenia so far this year.

“Together with our colleagues from the National Security Service and the police, we are now taking intensive, around-the-clock investigative measures to ascertain the circle of all individuals who may be connected with this crime,” he said.

At least six Armenian and foreign nationals were arrested in late February and early March after the SRC claimed to have seized more than 365 kilograms of heroin also smuggled from Iran. The government agency comprising Armenia’s customs and tax services said that the drugs were destined for Europe.

Also in February, authorities in Bulgaria found 400 kilograms of heroin from Iran which they said arrived in the eastern European country in a container ship. They arrested two Turkish citizens on drug trafficking charges.

The largest drug bust in Armenia’s history was reported in 2014. Armenian authorities seized at the time as many as 850 kilograms of heroin which they said was smuggled from Iran by a drug trafficking ring led by a Turkish national. The latter was arrested and subsequently sentenced by an Armenian court to 19 years in prison.

Iran is believed to be the main source of drug trafficking in and through Armenia. Hundreds of Iranians as well as their local accomplices have been imprisoned in the South Caucasus country on corresponding charges since the 1990s.

Drug trafficking is a serious challenge for the Islamic Republic as it borders Afghanistan, the world’s largest opium producer, and Pakistan, a major transit country for drugs.