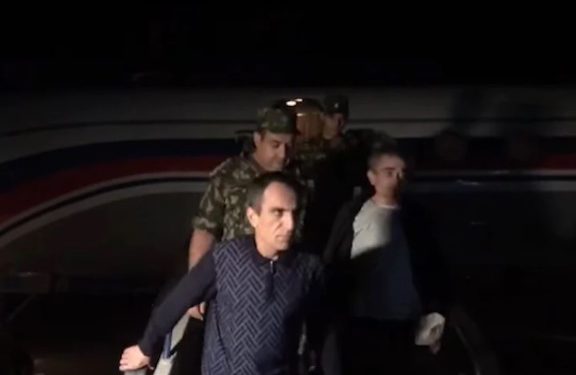 Two Armenian soldiers who were released by Azerbaijan are escorted down a plane on Sept. 7

The soldiers, Aramayis Torozyan and Artur Nalbandyan, were flown to Yerevan from Baku by a Russian military plane.

The Russian Sputnik news agency reported that they were freed in exchange for an Azerbaijani serviceman arrested in Nagorno-Karabakh late last month. It said the prisoner swap was brokered by Major-General Rustam Muradov, the outgoing commander of Russian peacekeeping forces stationed in Karabakh.

According to the Armenian Defense Ministry, Nalbandyan and Torozyan disappeared in thick fog early on July 14 after a military vehicle driven by the latter headed to a disputed portion of the border located in Armenia’s Syunik province.

The soldiers were believed to have strayed into Azerbaijani-controlled territory. Authorities in Azerbaijani never issued any statements on their capture and whereabouts.

The incident occurred in a border area where Azerbaijani forces reportedly advanced several kilometers into Armenian territory in May. They have since been locked in a standoff with Armenian troops.

Dozens of other Armenian soldiers remain in Azerbaijani captivity. Most of them were taken prisoner in Nagorno-Karabakh shortly after last year’s Armenian-Azerbaijani war.

Many of these POWs have been given lengthy prison sentences in recent months in trials condemned by the Armenian government. Yerevan regularly demands their unconditional release, saying that they are held in breach of a Russian-brokered agreement that stopped the six-week war. Baku says the agreement does not cover them because they were captured after the ceasefire took effect in November.