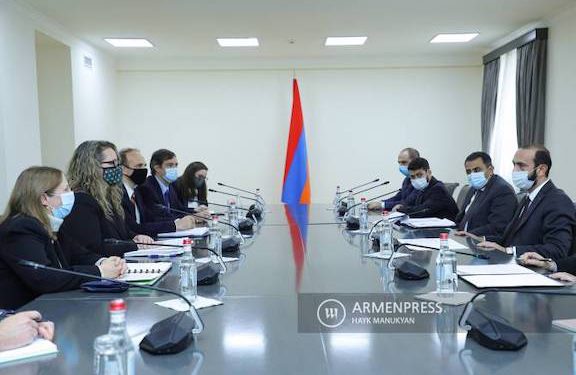 The United States on Tuesday, once again, reiterated the need for a comprehensive settlement of the Karabakh conflict through the mediation of the OSCE Minsk Group co-chairs.

This message was delivered by Assistant Secretary of State Erika Olson during a meeting in Yerevan with Armenia’s Foreign Minister Ararat Mirzoyan.

During the meeting, the parties exchanged views on regional security and stability and underscored the need for a comprehensive settlement of the Nagorno-Karabakh conflict within the scope of the mandate of the Co-Chairmanship of the OSCE Minsk Group, referencing Mirzoyan’s meeting with his Azerbaijani counterpart Jeyhun Bayramov, mediated by the co-chairs in New York this past September.

The parties also discussed the humanitarian situation created as a result of Azerbaijan’s aggression against Artsakh. In this context, Mirzoyan stressed the need for the unconditional repatriation of Armenian prisoners of war and other persons being held, as well as the importance of preservation of the Armenian religious, historical and cultural heritage of Artsakh in the territories that are currently under Azerbaijani control.

Mirzoyan and Olson discussed a broad range of issues related to Armenia-US relations, attached importance to the effective cooperation in the sectors of democratic development, strengthening of rule of law, human rights protection and anti-corruption and touched upon the joint steps to be taken within the scope of the U.S.-Armenia Strategic Dialogue and the programs that the USAID is implementing in Armenia.