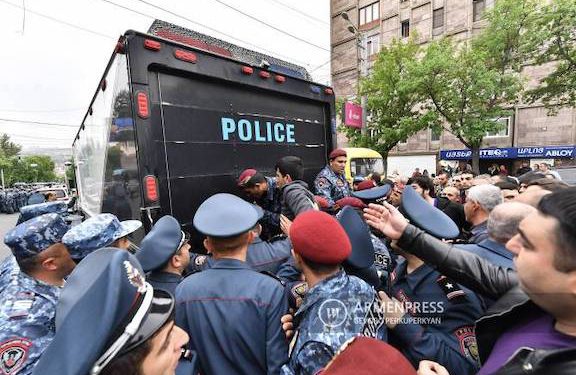 The United States and the European Union addressed the ongoing crackdown by police against opposition protesters in Armenia, and called on the authorities to exercise restraint, saying protests are a fundamental expression of freedom in “an open political system.”

“We believe that peaceful protests are an element of an open political system,” said State Department spokesperson Ned Price in a statement on Tuesday.

“We fully support the fundamental freedoms of expression and peaceful assembly. We urge people to express their opinions in a peaceful manner. We urge authorities to exercise restraint and encourage those protesting to refrain from violence and to respect the rule of law and Armenia’s democracy,” Price added.

“We had a Strategic Dialogue with the Armenians last week, it was in that forum that we reaffirmed our mutual commitment to Armenia’s democratic development and the United States support for lasting peace in the South Caucasus,” said the spokesperson.

Price was referring to the meeting held last week between Foreign Minister Ararat Mirzoyan and Secretary of State Antony Blinken, who praised Armenia’s adherence to democratic principles and its effort to advance democratic norms in the country.

Protesters are demanding the ouster of Prime Minister Nikol Pashinyan, whose statements last month in parliament have sparked one of the largest opposition protest actions since the end of the 2020 war. During a speech in parliament in April, Pashinyan said that pressure from the international community has forced him and his government to advance so-called peace talks with Azerbaijan in hopes of a peace treaty. Azerbaijan has insisted that Armenia recognize its territorial integrity that includes Artsakh.

The opposition claims that Pashinyan is relinquishing Artsakh and other territories in Armenia to Azerbaijan and slammed the prime minister for what they call “treason.” Last week, the opposition forces formally called for Pashinyan resignation in parliament. In response, Pashinyan, once again, blamed the previous regime for the current challenges facing Armenia.

The European Union also had words of caution for Armenia’s authorities, especially when it came to using security forces against protesters.

“We’ve seen many situations and of course questions are raised in those situations, and I am raising questions as well,” said Andrea Wiktorin, the head of the EU Delegation to Armenia, on Tuesday at press conference referring to the ongoing opposition protests and the law enforcement’s role in attempting to quell the demonstrations.

“Yes, I clearly said that the police must also adhere to all laws and rules. The police must not have impunity, but at the same time, I’d like to say that there could be different provocations and I would ask myself what can be done in case of such provocations,” Wiktorin added.

She also said that the E.U. supports a sustainable solution of issues between Armenia and Azerbaijan, including also a settlement of the Nagonro-Karabakh conflict, adding the E.U. is ready to do more.

“Mediation doesn’t mean that you come with solutions. Mediation is that you are creating a framework so that the conflicting parties can find a solution,” Wiktorin said, adding that European officials continue to meet with the sides to understand how the E.U. can help to register progress in talks.

“Our intention is to help to find a sustainable solution that makes it possible for everybody to live in peace and security,” explained Wiktorin.