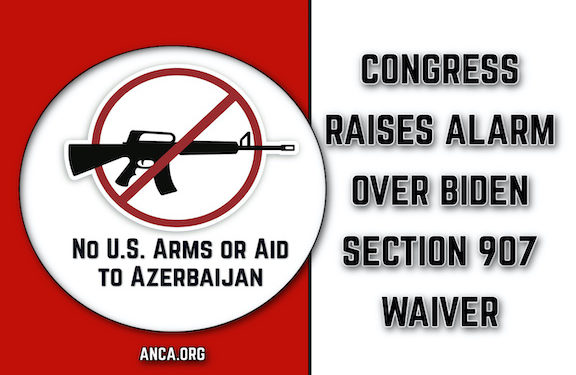 WASHINGTON—The U.S. House expressed concern over President Joe Biden’s April 23rd waiver of Section 907 restrictions on U.S. aid to Azerbaijan, citing its contribution to the disparity in U.S. military assistance to Armenia and Azerbaijan, in a report accompanying the Fiscal Year 2022 Foreign Aid Bill (H.R.4373), adopted this evening by a vote of 217 to 213, reported the Armenian National Committee of America (ANCA).

“We welcome today’s U.S. House report language as a meaningful step, alongside today’s adoption of the Pallone Amendment, toward rolling back President Biden’s reckless waiver of Section 907 and, more broadly, stopping all U.S. arms and aid to Azerbaijan’s oil-rich, racist, and openly anti-Armenian Aliyev regime,” said ANCA Government Affairs Director Tereza Yerimyan. “Not a single U.S. tax dollar should ever be shipped to the Azerbaijani military to kill, cripple, or capture Armenians.”

Earlier in the day, the U.S. House voted to amend H.R.4373 to restrict U.S. foreign military and training assistance to Azerbaijan, adopting the ANCA-backed Pallone Amendment, which was led by Congressional Armenian Caucus Co-Chair Frank Pallone (D-NJ), with the support of 19 Armenian Caucus colleagues.

In remarks offered on the House Floor, Rep. Pallone thanked House Appropriations Subcommittee on Foreign Operations Chair, Rep. Barbara Lee (D-CA), for her leadership in supporting pro-Artsakh/Armenia measures in the FY2022 Foreign Aid Bill. “I know that she has been a supporter of the Armenian people for many years. [I’ve] been to her district and seen some of the Armenian Americans who really love her,” stated Rep. Pallone, who spotlighted the need for expanded U.S. aid to Armenia and Artsakh. “This unprecedented commitment in funding will go a long way in helping economic, governance, and rule of law reforms, while further strengthening America’s strategic partnership with this young democracy. The language included in this bill also helps address the humanitarian needs in Artsakh as a result of the 44-day war perpetrated by Azerbaijan and Turkey last fall, and directs an additional two million dollars for demining programs.”

Rep. Pallone also had special praise for Chairman Jim McGovern (D-MA) and the House Rules Committee, which permitted the full U.S. House vote on the amendment to block foreign military and training funds to Azerbaijan.  “So, let me be clear, Madam Speaker, this bill sends a clear signal that we will not aid or tolerate authoritarian regimes that threaten peace and security, especially when those actions are aimed at a fellow democracy,” stated Rep. Pallone.

Rep. Pallone’s remarks were live-streamed by the ANCA on social media channels.

Rep. Speier concurred, noting, “As the Co-Chair of the Congressional Armenian Caucus, I commend my colleagues for including my request of $50 million in assistance to Armenia in the report language of the State and Foreign Operations appropriations bill.  This investment will help bolster Armenia’s economy, rule of law, and provide much-needed humanitarian assistance to Armenians affected by and displaced by last year’s horrific fighting in Artsakh.”  In a statement issued to the ANCA earlier this evening, Rep. Speier went on to state, “I was also proud to co-sponsor an amendment that will bar any International Military Education and Training (IMET) program funds and any Foreign Military Financing (FMF) funds from going to Azerbaijan. The U.S. must take a stand against Azerbaijan’s assaults against Armenia, not least to protect Armenia’s young democracy against Azerbaijan’s aggressive and autocratic government.”

The U.S. Senate has yet to review its version of the FY2022 foreign aid bill. The ANCA continues to work closely with Senate appropriators to cut military aid to Azerbaijan and expand U.S. aid to Armenia and Artsakh.