U.S. Says People of Artsakh Must Play a Role in its Future 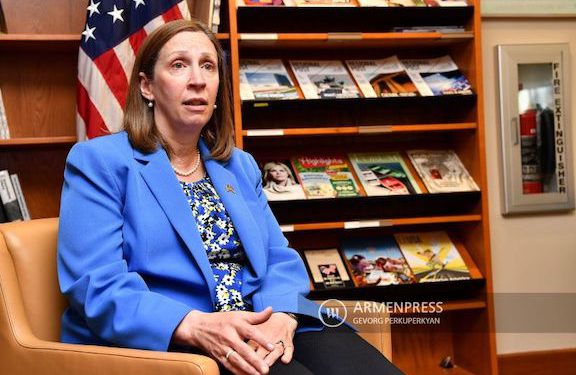 U.S. Ambassador Lynne Tracy during an interview with Armenpress

Lynne Tracy, the United States Ambassador to Armenia, said that the people of Artsakh must play a role in determining its future, adding that in Washington’s view the Nagorno-Karabakh conflict remains unresolved.

“Self-determination of peoples is a key, though not the only, internationally recognized principle to achieve this goal, and, in the context of a comprehensive settlement of the conflict, the United States, as a co-chair country of the OSCE Minsk Group, recognizes the role of the population of Nagorno-Karabakh in deciding its future,” Tracy told Armenpress in a lengthy interview with the outlet’s correspondent Aram Sargsyan.

“We continue to believe that the key to a peaceful, democratic, and prosperous future in the region is a negotiated, comprehensive, and sustainable settlement of all remaining issues related to or resulting from the Nagorno-Karabakh conflict,” Tracy added.

“It is U.S. policy that the status of Nagorno-Karabakh remains to be resolved. We continue to believe that the issues that led to the fighting in 2020 and are the root of the lasting tensions need to be addressed through negotiation and through a comprehensive settlement, according to internationally recognized principles, including territorial integrity, self-determination of peoples, and the non-use of force. We encourage further peace negotiations and stand ready to engage bilaterally and with like-minded partners, including through our role as an OSCE Minsk Group Co-Chair,” explained the U.S. Ambassador.

Tracy was asked about repeated statement from President Ilham Aliyev of Azerbaijan, who continues to insist that the Karabakh conflict ended after the military aggression his country waged against Artsakh in 2020 and his insistence that the Minsk Group Co-Chairs failed in mediating the settlement process.

“Let me emphasize that there is no military solution to the conflict,” Tracy insisted. “The United States remains committed to promoting a peaceful, democratic, and prosperous future for the South Caucasus region.”

“This includes applying existing mechanisms for direct communication to find comprehensive solutions to all outstanding issues, and to normalize their relations through the conclusion of a comprehensive peace agreement. The United States remains ready to assist Armenia and Azerbaijan with these efforts, including in our capacity as a Co-Chair of the OSCE Minsk Group to help the countries find a long-term comprehensive peace,” said Tracy.

The ambassador was also asked Azerbaijan’s continued breach of ceasefire provisions, including the most recent breach of the line-of-contact in Artsakh’s Askeran region, when Azerbaijani forces invaded the village of Parukh. The daily tactics to terrorize Artsakh residents, as well as the systematic destruction of Armenian cultural landmarks and appropriation of religious institutions were also brought up by Sargsyan, the Armenpress reporter.

“Actions, such as the recent gas disruptions and Azerbaijan’s troop movements across the line of contact, are a cause for concern.  In his phone call with Prime Minister Pashinyan on April 5, U.S. Secretary of State Antony J. Blinken underscored the importance of avoiding further escalation in the region. Armenia and Azerbaijan need to use direct communications channels to deescalate,” explained Tracy.

The ambassador also discussed her meeting in March with relatives of Armenian prisoners of war and captives, some of whom have received long sentences from Azerbaijani courts.

“We urge the release of all prisoners as well as increased efforts to obtain information about the fate of missing servicemembers, including from the 1990s, noting the pain of families who do not know their loved ones’ whereabouts or fate,” said Tracy.

The ambassador also discussed the U.S. position on recent negotiations over so-called “peace talks” between Armenia and Azerbaijan, a topic discussed early last month when Pashinyan and Aliyev met in Brussels with European Council President Charles Michel. She also touched on the process of normalization of relations between Armenia and Turkey.

“We welcomed the April 6 meeting between Prime Minister Pashinyan and President Aliyev in Brussels, the positive momentum on preparations for peace talks, and forward movement on the formation of a bilateral commission on border delimitation. The United States remains committed to promoting a peaceful, democratic, and prosperous future for the South Caucasus region. As the Secretary emphasized in his recent calls with the two leaders on April 5, we continue to encourage further peace negotiations between Armenia and Azerbaijan and reiterate the United States stands ready to engage bilaterally and with like-minded partners, including through our role as an OSCE Minsk Group Co-Chair, to help the countries find a long-term comprehensive peace,” said Tracy.

“The United States supports dialogue between Turkey and Armenia that can lead to full normalization of relations between these two neighbors—an outcome important to the future of both countries and for stability in the Caucasus,” Tracy said. “It has long been and remains the position of the United States that normalization should take place without preconditions or linkage to any other issues, including the Nagorno-Karabakh negotiations.”