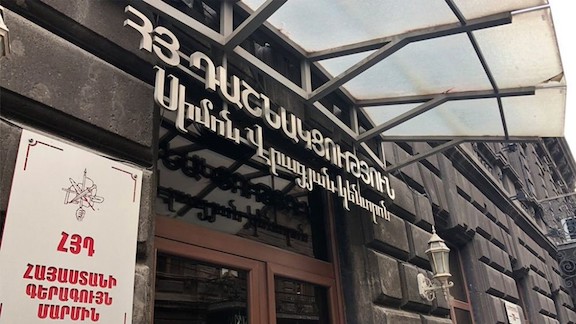 Meanwhile Moscow urged Yerevan and Baku to resolve the crisis through diplomacy, as France and the United Nations Secretary General expressed serious concern with the escalation of the now two-week standoff at the Armenian border.

“The United States considers any movements along the non-demarcated areas of the international border between Armenia and Azerbaijan to be provocative and unnecessary,” said Ned Price, a State Department spokesperson on Thursday.

“The United States is concerned by recent developments along the international border between Armenia and Azerbaijan, including the detention of several Armenian soldiers by Azerbaijani forces,” said Price. “We call on both sides to urgently and peacefully resolve this incident. We also continue to call on Azerbaijan to release immediately all prisoners of war and other detainees, and we remind Azerbaijan of its obligations under international humanitarian law to treat all detainees humanely.”

“The Russian side reaffirmed its appeal to the parties to resolve all emerging problems peacefully through negotiations. Russia is ready to continue to provide every possible assistance to this process,” Rudenko said.

Rudenko and Klaar exchanged views and assessments of the situation on the Armenian-Azerbaijani border, as well as the course of the settlement of the Nagorno-Karabakh conflict mediated by the OSCE Minsk Group co-chairs, according to a Russian foreign ministry statement.

France also expressed serious concern at the escalation of the provocations along the Armenian border, specifically the capture of the six Armenian soldiers by Azerbaijani forces.

“France calls on the parties to exercise the utmost restraint and to refrain from any provocation. The demarcation and delimitation of the border between the two countries must be done in the framework of a negotiation between the parties without any fait accompli on the ground,” France’s Foreign Ministry said in a statement on Thursday.

The French foreign ministry also made reference to remarks made by President Emanuel Macron on May 13, when the French leader stressed the need for the immediate withdrawal of the Azerbaijani armed forces from the sovereign territory of Armenia during a telephone conversation with Prime Minister Nikol Pashinyan.

The U.N. also expressed concern of the Armenia border developments, urging “all relevant actors to exercise restraint to avoid any actions that may escalate tensions further,” said Stéphane Dujarric, the spokesperson the UN Secretary-General

“We understand that negotiations are ongoing. All outstanding bilateral issues should be resolved peacefully, through dialogue and diplomatic means,” Dujarric added.