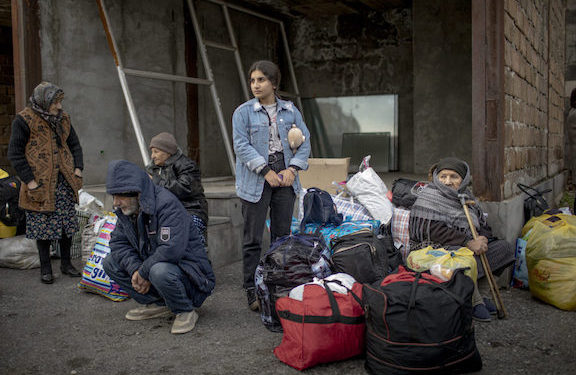 People wait to take a bus to return to Stepanakert, in Yerevan, Armenia, on November 19, 2020. (Photo by Anush Babajanyan for POLITICO).

The Nagorno-Karabakh Republic Union of Refugees, a non-governmental organization advocating for the plight of displaced persons, has written an open letter to relevant international bodies, as well as the Artsakh authorities, calling on them to urgently “provide adequate and sufficient humanitarian and medical assistance to Armenian refugees and displaced persons in Artsakh.”

The letter, authored by the organization’s chairman Saro Saryan, was provided to Asbarez for publication.

We write to alert you to the suffering of tens of thousands of people amidst the humanitarian crisis unfolding in the Republic of Artsakh, due to the recent military aggression by the neighboring despotic regime of Azerbaijan and its military ally Turkey. As you are aware, Artsakh has been home to an indigenous ethnic Armenian population for several thousand years, despite numerous ethnic cleansing attempts by its hostile neighbors. In late 2020, Azerbaijan and Turkey occupied 80% of the territory of the Republic of Artsakh, including the entire Hadrut region and settlements of the Martuni, Askeran, Shushi and Mardakert regions. Moreover, their militaries captured Shushi, a strategically important and culturally significant city for Armenians, which was far from the actual frontline. Azerbaijan’s occupying forces expelled Armenian residents from these seven (7) regions in the days following the November 10, 2020 ceasefire. Tens of thousands of people, including thousands of children, were forced to flee, with no opportunity to take their personal belongings or property. Many of them were not strangers to deportation; having been expelled from their homes in 1988-1994 due to Azerbaijani aggression, and now have again been subjected to persecution, becoming internally displaced persons (IDPs).

The displaced also include ethnic Armenians who escaped from the cities of Sumgait, Kirovobad (Ganja), and Baku, from the Armenian settlements of Khanlar, Shahumyan, Dashkesan, Shamkhor and Getabek regions of Northern Artsakh, as well as from dozens of other settlements in Azerbaijan, during the brutal anti-Armenian massacres inflicted on the civilian population in response to the Republic of Artsakh’s peaceful calls for self-determination in the late 1980s and early 1990s.

In addition to the existing unresolved issues of thousands of refugees and deported ethnic Armenians in Artsakh that were left homeless and ignored by the international community for 30 years, the streets of Artsakh’s capital, Stepanakert, and nearby villages are again filled with displaced persons from the territories recently occupied by Azerbaijan. Fearing they will be brutally killed or subjected to torture after their capture, including beheadings as documented to those who did not have time to escape, these Armenian civilians left their homes where their families had lived for generations. They now suffer from immense grief, trauma, separation and loss of loved ones, as well as from economic loss such as lack of dwelling, jobs, food, drinking water, land for agriculture, clothing, schooling for children, and other basic human rights.

Azerbaijan’s hostility further aggravates the fate of the refugees and IDPs, including by blocking access to humanitarian aid in route to Artsakh and by taking captive and torturing civilians. It is an undeniable fact that civilian and military Armenian POWs are still being held by Azerbaijan months after the military aggression and that nineteen (19) ethnic Armenians who were last documented in Azerbaijani captivity have been recently found dead; this both demonstrates our plight and exasperates the peace processes. Many families are waiting to learn the fate of their loved ones, and Azerbaijan refuses to provide basic information as to their status, in violation of a current order by the European Court of Human Rights; moreover, many of the captives include people who were captured well after the November 10, 2020 ceasefire. As such, the international community must be proactive and must mediate to ensure basic social and humanitarian rights for Artsakh’s refugees and IDPs.

We call on the listed organizations, in particular the UNHCR, to include Armenian IDPs in their humanitarian assistance initiatives and focus. The people of Artsakh require the same protection afforded to the refugees in other regions and conflicts. For example, for three decades, Azerbaijani refugees have received internationally recognized refugee status and its corresponding privileges in terms of humanitarian aid. This dichotomy runs counter to the Charter of the United Nations and the Resolution of its General Assembly of December 10, 1988, as well as the provisions of the UN Universal Declaration of Human Rights. According to the applicable law, internally displaced persons, as citizens who were forced to leave their places of permanent residence and are now living under the jurisdiction of their state, should enjoy the same protection from the international community as the refugees who have not yet received their status.

If the problems of refugees and IDPs, who are among the most vulnerable and defenseless members of the population, are not resolved, the situation in the region will lead to disastrous consequences.

In addressing the local authorities, we would like to note that the citizens of Artsakh, who fall under the definition of IDPs, remain in the country of their citizenship and should enjoy its protection. At the same time, the de-occupation of their regions will greatly contribute both to the hope for a faster end to their plight and the statistics on the number of repatriates.

The NKR Union of Refugees NGO respectfully calls upon all applicable UN organizations and programs, and human rights organizations, to provide adequate and sufficient humanitarian and medical assistance to Armenian refugees and displaced persons in Artsakh in order to avoid further destabilization in the country and continued humanitarian disaster.

Saro Saryan, Chairman of the NKR Union of Refugees NGO
May 7, 2021