Varant and Hoori Melkonian Donate $300,000 to ACF During Appreciation Event 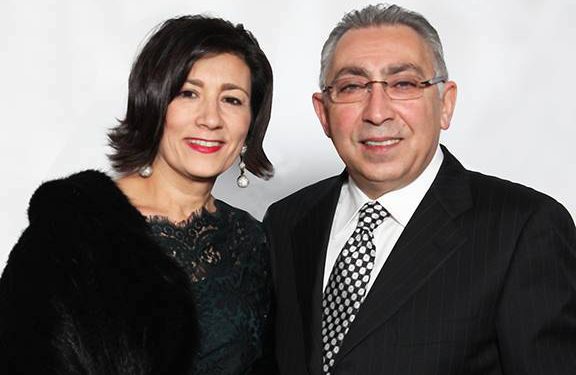 At an event on Sunday organized by the Armenian Cultural Foundation to express gratitude to its donor, long-time community activists and benefactors Mr. & Mrs. Varant and Hoori Melkonian announced that they will donate an additional $300,000 to the organization.

In March, the ACF publicized a fresh round of donations totaling $300,000, which the organization had raised in lieu of its annual gala, which was cancelled this year due to the pandemic.

Sunday’s event, which brought around 150 supporters to the Mila Rooftop located at the Glenmark Hotel in Glendale, was an opportunity for the ACF Board of Directors to extend its gratitude to its donors and supporters and update them on the ongoing efforts by the organization to provide assistance for various program in the community, as well as Armenia, Artsakh and elsewhere.

During the short program, Varant Melkonian took to the stage to applaud the ACF for its ongoing commitment to advance educational and cultural programs and announced that he and his wife, Hoori, will make an additional donation of $300,000 to the organization. The Melkonians had already donated $100,000 to the ACF, when the organization announced its 2020 fundraising.

Varant and Hoori Melkonian’s storied involvement, activism and support to the community spans decades and includes several other organizations, including the Armenian National Committee of America-Western Region, the Homenetmen, the Western Prelacy among others.

Following welcoming remarks by event chairperson Elizabeth Boyadjian, Avedik Izmirlian, the chair of the ACF Board of Directors thanked the hundreds of generous donors that have made it possible for the organization to continue its mission despite the pandemic and the ensuing restrictions. He also highlighted the organization’s sprint to action following the devastating explosion in Lebanon last year, and the key role played in the multimillion dollar fundraising during the war in Artsakh.

The ACF’s efforts to assist our community during the pandemic were reported during remarks by ACF Board member Garo Ispendjian, who also emphasized the important role played by community organizations in advancing the ACF’s message.

ACF member Shahen Derderian briefed the guests on the ACF’s mission to Armenia last April, when ACF representatives delivered $100,000 worth of much-needed assistance to the families of our fallen or wounded heroes.

In March, the ACF announced that it had partnered with the Armenian Educational Foundation in that organization’s efforts to rebuild schools in Artsakh following the destructive war there last fall.

The AEF’s Vice-President Peter Baghdassarian, himself a long-time supporter of the ACF, briefed the guests about the AEF’s activities, as well as efforts to ensure that the educational needs of the people of Armenian and Artsakh are unimpeded, despite the crisis plaguing out country. In his presentation, Baghdassarian highlighted how a $25,000 contribution by the ACF will help in construction of schools in Artsakh.