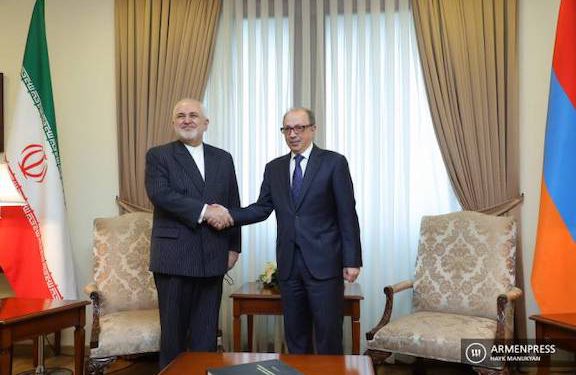 Iran’s Foreign Minister Mohammad Javad Zarif, who is on an official visit to Armenia, said on Wednesday that for Iran internationally recognized border and territorial integrity are red lines, the violation of which Tehran will not tolerate.

Zarif told Armenia’s Acting Foreign Minister Ara Aivazian that Iran is extremely concerned about the escalation of tensions on the Armenia-Azerbaijan border, where currently a growing standoff continues after Azerbaijani forces breached Armenia’s sovereign border and advanced into Armenia.

Last week, a senior Iranian official voiced strong support for Armenia’s territorial integrity when he commented on the continuing military standoff on its border with Azerbaijan.

“The position of the Islamic Republic of Iran is very clear, unequivocal and resolute: the territorial integrity of the regional states must be preserved,” Mojtaba Zolnour, the chairman of the Iranian parliament’s committee on national security and foreign policy, told the Russian Sputnik news agency last week. “The existing borders must be fully protected and Iran’s border with Armenia must be preserved.”

Zarif, who visited Baku on Tuesday, expressed hope that during his visit to Armenia options can be explored to resolve the escalating border tensions.

“We have stated and again state that the internationally recognized borders and the territorial integrity are our red line,” Zarif added, explaining that throughout the Karabakh conflict Iran has always advocated for a peaceful settlement.

“We have respected the territorial integrity and sovereignty of these countries [Armenia and Azerbaijan], the rights of their peoples. During this new crisis we have made a special effort to play a role in resolving the crisis,” said Zarif.

“Undoubtedly, this encroachment against Armenia’s territorial integrity is a direct consequence of the war unleashed on September 27, 2020, by Azerbaijan against the people of Artsakh, their right to self-determination and life, as well as the inadequate international and regional response to Azerbaijan’s actions toward undermining the regional peace,” Aivazyan told Zarif.

“Encouraged by the sense of impunity, Azerbaijan is trying to create new geopolitical realities which do not stem from the interests of countries in the region or promote stability. In these conditions, dialogue with our regional partners is extremely important,” added Aivazyan.

According to Armenia’s foreign ministry, the two leaders also spoke about bilateral cooperation and strengthening relations between Yerevan and Tehran.