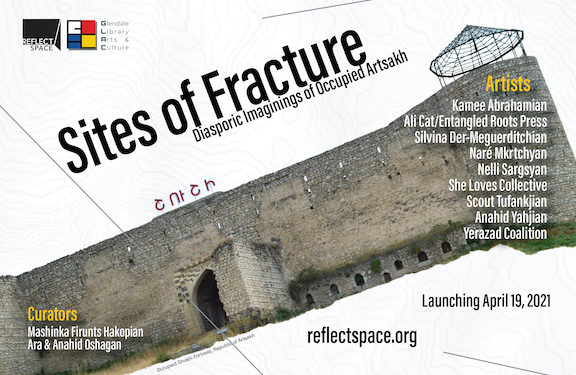 GLENDALE—Glendale Library Arts & Culture and ReflectSpace Gallery present “Sites of Fracture: Diasporic Imaginings of Occupied Artsakh,” a virtual exhibition that brings together diasporan Armenian artists—from the United States, Canada, and Germany—to build collective counter-narratives to the forces of occupation and cultural erasure in the Republic of Artsakh. The exhibition launched on April 19.

In September 2020, the autocratic state of Azerbaijan invaded the Republic of Artsakh and initiated an campaign of ethnic cleansing targeting its Indigenous Armenian population. With a vastly out-financed military and direct support from Turkey, Azerbaijan succeeded in occupying large swaths of Artsakh. In the process, thousands lost their lives and 100,000 Armenians were displaced from their ancestral homes.

The global Armenian diaspora was gripped by the collective trauma of watching a campaign of ethnic cleansing unfold via digital screens and televisual transmissions. As Indigenous Armenian heritage faced systematic destruction, a cadre of diasporan Armenian artists responded with projects that counter the attempted erasure of Armenian identities, histories, and cultural artifacts.

“Sites of Fracture” also gestures towards the repatriation of ancestral lands. The virtual exhibition takes place in the photographically reconstructed fortress of the city of Shushi—Artsakh’s historical cultural capital, now occupied by Azerbaijan. In the process, “Sites of Fracture” imagines decolonized futures for Shushi, envisioning an independent Republic of Artsakh wherein Indigenous communities exercise the right to have been granted the right to self-governance and cultural autonomy.

“Sites of Fracture: Diasporic Imaginings of Occupied Artsakh” is co-curated by Mashinka Firunts Hakopian, Ara Oshagan, and Anahid Oshagan and is part of the Glendale Library Arts & Culture’s Armenian Genocide Remembrance Month. The exhibition launches on April 19 in a 3D virtual gallery accessible through the ReflectSpace Gallery website: www.reflectspace.org.

“Sites of Fracture” is also part of the Glendale Library Arts & Culture’s “Be the Change” series focuses on: Inclusion – Diversity – Equity – Antiracism. “Be The Change” events will build collective understanding of systemic racism, elevate the voices and stories of BIPOC, and inspire our community to be the change. “Be The Change” is sponsored by the City of Glendale, California Arts and Culture Commission, with funding from the City of Glendale Urban Art Fund.

ReflectSpace Gallery at the Glendale Central Library opened in 2017 when the library reopened after a major renovation. It came at the behest of The Glendale City Council for a city space to address the Armenian Genocide and other human atrocities. ReflectSpace is an exhibition space designed to explore and reflect on genocides, human and civil rights violations. Immersive in conception, ReflectSpace is a hybrid space that exhibits contemporary art as well as archives, employing installation, technology and interactive media to engage viewers on an emotional and personal level. ReflectSpace strives to reflect the past and present of Glendale’s communal fabric and interrogate current-day global human rights issues.

Kamee Abrahamian is a supreme hyphenate who arrives in the world today as an interdisciplinary writer-artist-producer-performer-organizer and a non-binary, queer-feminist caregiver. They grew up in an immigrant suburb of Toronto and was born into an Armenian family displaced from the SWANA region. Kamee’s work is steeped with relational and generative practices oriented towards ancestral reclamation, visionary fiction, and diasporic futurism. They hold a BFA/BA in film and political science (Concordia University), an MA in expressive art therapy (European Graduate Institute), and a PhD (ABD) in community liberation, indigenous and eco psychologies (Pacifica Graduate Institute). Kamee has published plays, literary and academic writing, while organizing and presenting films, artwork, staged performances and workshops internationally. Recent projects worth mention are “Ensouled,” “Hok Danil,” “Transmission,” and “Dear Armen.”

Ali Cat/Entangled Roots Press is an artist and print maker living on unceded Cowlitz, Multnomah and Confederated Tribes of Grand Ronde land at the confluence of two rivers, also known as Portland, Oregon. She produces her work under the name Entangled Roots Press. Her prints mingle the literal and metaphorical to illuminate and comment upon the world around us. Relief, screen, and letterpress prints span from the carnage of clear-cuts to the beauty of peoples movements. Ali’s prints pull from ancestral herstories and push towards liberatory futures; entangling lessons from gardens, symbols in coffee cups, woven threads from Armenia and Euskal Herria, to the printed page. Ali received her BFA at Pacific Northwest College of Art in Portland. She completed an artist-residency at Proyecto’ace in Buenos Aires in 2014, and was a member of Flight 64, a member-run, nonprofit print studio, from 2015 to 2018. Ali currently works as the Print Studio Technician at PNCA.

Silvina Der-Meguerditchian, born in Buenos Aires, lives and works in Berlin. Her work explores themes of belonging, the role of minorities in society, and the potential of an “in-between” space. Memory and working with archives are the focus of her artistic exploration. She is the artistic director of the Houshamadyan project, a multimedia memory book for Armenian Ottoman history. Silvina Der-Meguerditchian was a fellow at the Tarabya Academy of Culture in 2014/15. In the summer of 2015, she participated in Armenity, the Armenian pavilion at the 56th Venice Biennale, which was awarded the Golden Lion for the best national representation. In the fall of 2015, she curated the exhibition “ENKEL, new geographies of belonging” in Istanbul. Since 2014, she has worked with “Women mobilizing memory,” a group of artists, writers, museologists, social activists, and memory and memorial scholars working internationally. In 2020, her film “The Wishing Tree” was awarded with a Special Mention at the Sharjah Film Platform. Her first personal catalog with VFMK (Verlag für Moderne Kunst) has just been published in January 2021.

Naré Mkrtchyan was born in Armenia and raised in Los Angeles. She is a graduate of University of Southern California School of Cinematic Arts. She has written, directed and produced over sixty projects, including her latest which was a Netflix original. Her documentary The Other Side of Home remains the only Armenian Genocide film to be shortlisted for Oscar. Her passion is telling unique human stories that connect people and move beyond the boundaries of nationality, gender, and religion.

Nelli Sargsyan is an associate professor of anthropology at Emerson College, Boston, MA. As a feminist, Sargsyan situates herself at the disciplinary intersections of political anthropology, queer studies, and critical race studies, among others. In her scholarly-poetic work and teaching Sargsyan is interested in stretching disciplinary and genre boundaries to explore the multi-sensory possibilities of feminist world-making. Most recently she has been interested in political work that cultivates feminist consciousness and collective care, whether it be through direct street action, public performance, or feminist fabulation. Sargsyan’s work has appeared in academic journals such as “Feminist Formations, History and Anthropology,” and “Feminist Anthropology,” as well as on online platforms such as “ARTMargins,” “Public Seminar,” and “Socioscope.”

SheLovesCollective is an alliance of women artists who share a strong belief in the power of creating social change through art. On October 11th, 2020 the collective launched a performance art piece entitled, The Rifles Our Ancestors Didn’t Have in response to the war that reignited on September 27, 2020 in the Republic of Nagorno-Karabakh, also known as Artsakh.

Scout Tufankjian has spent the bulk of her career working in the Middle East, but is best known for her work documenting both of Barack Obama’s presidential campaigns. Her book on the 2007 to 2008 campaign, “Yes We Can: Barack Obama’s History-Making Presidential Campaign” was a New York Times and LA Times bestseller. Her second book, “There is Only the Earth: Images from the Armenian Diaspora Project,” is the culmination of six years documenting Armenian communities in over 20 different countries. More recently, she has worked for the HALO Trust in Nagorno-Karabakh and Angola, and has served as a temporary acting director of Committee to Protect Journalists’s Emergency Response Team. She is a two-time TUMO Workshop leader, in Yerevan and Stepanakert, and continues to work as a freelance photographer and as a consultant for both RISC Training and Committee to Protect Journalists. More of her work can be seen on her website.

Anahid Yahjian is an independent writer, director and producer of experimental, documentary and narrative cinema. Her commitment to telling true stories (even if they come from her imagination) was shaped by an early love for visual storytelling that was formalized in college and took flight during her coming of age in Armenia. There, she produced the internationally-awarded narrative short 140 Drams (Camerimage, Clermont-Ferrand 2013), laid the creative groundwork for the feature documentary Spiral (IDFA Bertha Fund 2015, Golden Apricot 2017) and shot and directed the viral digital documentary LEVON: A Wondrous Life (2013). Since returning to her native Los Angeles, she shot and directed the experimental cine-triptych, Corpus Callosum (2014-2016) and directed the narrative science-fiction short Transmission (BFI Flare, Vancouver QFF 2019). She splits her time between Yerevan, Sofia (her birthplace), Los Angeles (her home), and New York City.

How Can the Armenian Patriarch Be as Pro-Turkish as Erdogan?