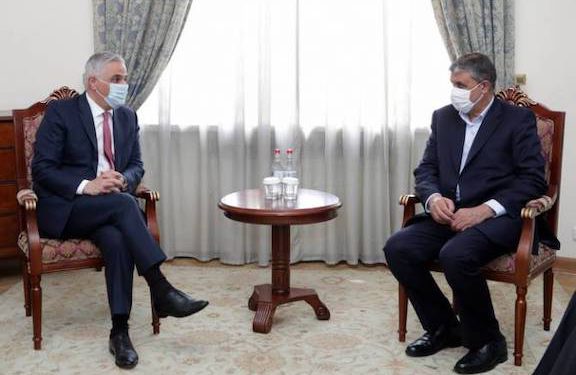 Yerevan gave assurances to Iran that the issue of creating a “corridor” with Azerbaijan has not been and will never be discussed by Armenia, during talks on Monday between Armenia’s Acting Deputy Prime Minister Mher Grigoryan and Iran’s Urban Development Minister Mohammad Eslami, who is visiting Armenia.

Grigoryan who is also Armenia’s representative on a commission to open borders with Azerbaijan as mandated by the November 9 agreement briefed Eslami on the efforts to what is being called the “unblocking of regional transport communications.”

Last week, a senior Iranian official voiced strong support for Armenia’s territorial integrity when he commented on the continuing military standoff on its border with Azerbaijan.

“The position of the Islamic Republic of Iran is very clear, unequivocal and resolute: the territorial integrity of the regional states must be preserved,” Mojtaba Zolnour, the chairman of the Iranian parliament’s committee on national security and foreign policy, told the Russian Sputnik news agency on May 18. “It would be unacceptable for us if they took away a part of Armenian territory and changed our borders. That is, if we had a new neighbor. The existing borders must be fully protected and Iran’s border with Armenia must be preserved.”

Eslami and Grigoryan also discussed expanding cooperation between Armenia and Iran, as well as the prerequisites for expanding trade turnover. They also spoke about the potential for cooperation via the Eurasian Economic Union.

Earlier on Monday, Eslami met with Armenia’s Acting Minister of Territorial Administration and Infrastructures Suren Papikyan, with whom the enhancing of the partnership between the two countries in the transportation sector, as well as the construction of the interstate highways between Iran and Armenia.

Papikyan outlined Yerevan’s priorities in improving road and transport infrastructures, including the construction of the North-South highway and the possibilities it will create to increase trade and economic turnover between the ports in the Persian Gulf and the Black Sea.

Known as the Persian Gulf-Black Sea international transport corridor, the project, which has been in discussion and implementation for more than a decade, envisions a highway connecting Iran’s port in Bandar Abbas in the Persian Gulf with Batumi, Georgia through Armenia.

Eslami expressed that Iran is interested in expanding auto and rail communication with Armenia and being involved in the construction of the southern parts of the North-South road. In this context the sides exchanged ideas over the possibilities of enhancing the participation of Iranian companies in the projects aimed at infrastructure improvement in Armenia.

Papikyan briefed Eslami about the development and launch of the construction of the Sisian-Kajaran and Kajaran-Agarak parts of the North-South road. Papikyan also stressed that the construction in moving forward in the highest calibre, which can bolster the involvement of Iranian, as well as foreign, construction companies in the effort.