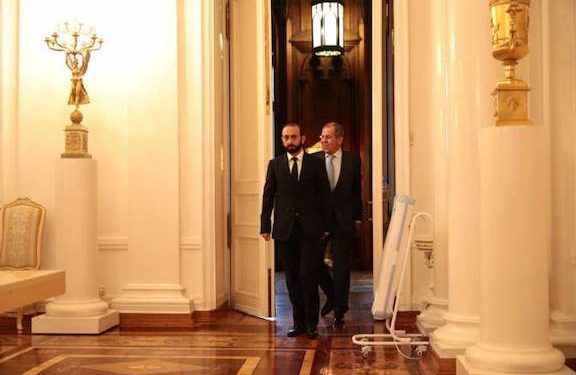 Armenia's Foreign Minister Ararat Mirzoyan and his Russian counterpart Sergei Lavrov walk out of a meeting in Moscow on Aug. 31

Armenia’s Foreign Minister Ararat Mirzoyan, while in Moscow on Tuesday, blasted Azerbaijan for encroaching on Armenia’s sovereign territory, while his Russian counterpart Sergei Lavrov called on Baku to release all Armenian captives without preconditions.

“At this moment Azerbaijan is holding a large number of Armenian servicemen who have appeared there in late November after the [Nov. 9] statement came into force and an agreement was reached to stop any hostile action. The Russian President, in contacts with the Azerbaijani leadership, President [Ilham] Aliyev, as well as we, on other levels, are calling on them to release the captives without preconditions because it would be an important humanitarian step and action for building trust, which is needed,” Lavrov said.

With this statement, Lavrov overtly reiterated Aliyev’s assertions that the Armenians currently being held in Azerbaijan were captured after the November 9 agreement, a claim rejected by Yerevan.

Lavrov said that Moscow would continue to advance this position, saying that the final decision was out of Russia’s hands.

Mirzoyan, who was on his first diplomatic visit since becoming foreign minister, was quick to say that Yerevan had fulfilled its commitment long ago as it has returned all Azerbaijani POWs in compliance with the “all for all” principle.

“We believe that Azerbaijan must return all prisoners of war and other detained persons, not only as a fulfillment of its commitments, but also for creating an atmosphere of mutual trust. In that atmosphere it would be possible to move forward with further discussions and solution of all issues,” Mirzoyan said.

Armenia’s foreign minister blasted Baku, saying that it has not fulfill the provisions of the November 9 trilateral statement.

“Azerbaijan, in violation of international law, publicly takes provocative actions which are a direct encroachment against Armenia’s sovereign territory, which we have been dealing with May 12,” said Mirzoyan, adding that Baku’s provocations always are followed by statements threatening aggression by official Baku.

Mirzoyan blamed current tensions in the region on Azerbaijan’s non-constructive policy and touted Yerevan’s strategy to promote peace and stability. “We are ready for active dialogue to this end.”

Lavrov said that current standoff on the Armenia-Azerbaijan border may be resolved only through diplomatic means, stressing that a long-term solution would be possible only through the demarcation of borders.

“The President’s [Putin] readiness on this matter is well known. Today we have discussed how the quick implementation of this process must be ensured. We have confirmed our willingness to assist in that process in any way,” Lavrov said during a joint press conference with Mirzoyan.

Lavrov also added that he and Mirzoyan discussed the settlement of the Nagorno-Karabakh conflict, while emphasizing the need to strengthen peace, security and stability in South Caucasus.

“We agreed strengthen our focus on eliminating the factors which cause tension in the relations of Yerevan and Baku, including the final solution of the issues regarding the return of Armenian prisoners of war and the handover of the maps of minefields. The necessity for further activity of the OSCE Minsk Group Co-Chairs was also confirmed,” Lavrov said.

Mirzoyan said that if Armenia and Azerbaijan were to start negotiations over a peace treaty, then the agenda of these negotiations must unconditionally include determining the status of the Nagorno-Karabakh based on the principles advanced by the OSCE Minsk Group Co-Chairs.

“The government of Azerbaijan would be better off focusing on the implementation of the agreements that have already been reached on November 9, 2020 and January 11, 2021,” Mirzoyan said.