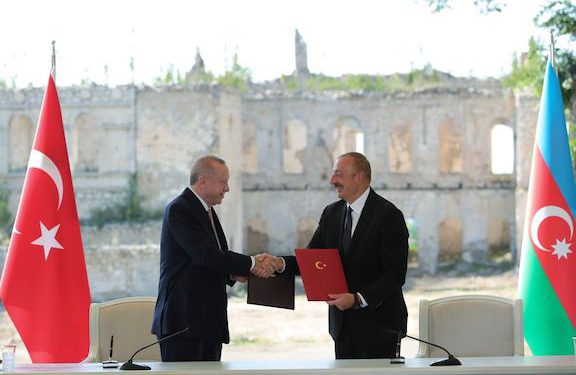 For 44 days last fall, we Armenians and the entire world witnessed Turkey’s brazen and overt military and financial involvement in Azerbaijan’s aggressive attack on Artsakh. It was widely reported and confirmed by world leaders that in addition to sending weapons to Azerbaijan, Turkey had also contracted thousands of ISIS jihadists to fight alongside Azerbaijani forces, dealing a crushing blow to Artsakh and Armenia.

What followed were declarations by various Turkish leaders, chief among them the country’s president Recep Tayyip Erdogan, who during what was dubbed as a “victory parade” in Baku, essentially praised Azerbaijan’s barbaric actions, dedicated the “win” to his Turkish predecessors who had an active role in perpetrating the Armenian Genocide, as well as systematic Azerbaijani attacks on Armenians during the early part of the last century.

Then came the announcements and groundbreaking of a school in occupied Shushi sponsored by the Turkey’s ultra-right fascist group the Grey Wolves, whose hand signals Erdogan has used during elections and other rallies.

The news of Erdogan and his Azerbaijani counterpart Ilham Aliyev visiting occupied Shushi, where they signed a military and strategic “Alliance Accord,” at the center of which were overt threats to Armenia’s sovereignty and national security, crystalized the reality that Armenia’s enemies were consolidating their efforts to inflict more harm on Armenia.

Hence, it was shocking to see that Prime Minister Nikol Pashinyan hinted at the possibility of talks with Ankara without any preconditions in his five-year government plan, which was approved on Thursday only by his Civil Contract party members in parliament.

It also calls into question Yerevan’s complete ignorance of existential threats from its neighbors, when Pashinyan on Friday assessed generic remarks made by Erdogan as “positive signals,” to which Armenia plans to respond “with positive signals.”

Earlier this week, Erdogan said during a meeting with foreign ambassadors accredited to Turkey that if Armenia takes positive steps to establish peace in the region, Turkey will respond adequately.

“After the recent Karabakh war, new opportunities have been created for progress in that direction,” Erdogan said. “We have already stated that if Armenia responds positively to these opportunities, we will take the necessary steps.”

Those “new opportunities” Erdogan was referencing were the over support it received from the Kremlin during the 44-Day War, as well as advances made by the Azerbaijani military forces into Armenia’s sovereign territory, when they breached Armenia’s borders more than three months ago and have set up camp in Armenia. Since then soldiers have been killed, civilians have been threatened and most recently, a major road between Goris and Kapan was blockaded. Armenia’s border provinces of Syunik, Gegharkunik and Ararat have been under siege.

“There have been certain public positive signals from Turkey. We will evaluate those signals and respond to those signals with a positive signal,” Pashinyan said at the start of his cabinet meeting on Friday, signaling his administration’s appetite for playing footsie with the country that was equally responsible for the deaths of thousands of Armenian soldiers and civilians last fall.

Since the defeatist November 9 agreement, which saw the surrender of territories in Artsakh and Armenia to Azerbaijan, Pashinyan has also been waving the banner for opening transportation and communications links in the region—aka opening Azerbaijan’s border with Armenia. While Pashinyan doesn’t interpret that aspect of the November 9 agreement to mean the opening of the border, Aliyev has been vocally touting the prospects of creating the so-called “Zangezur Corridor,” which envisions a direct link—through Meghri—to Nakhichevan.

When Erdogan was feeling at home in occupied Shushi mere weeks after Azerbaijani forces breached Armenia’s sovereign border, Pashinyan was on the campaign trail, brandishing hammers and threatening to force his opponents to “lie on asphalt” and “bang [their heads] against the wall.”

At the same time, Armenia’s foreign minister and leading diplomats were jumping ship, with no one manning the fort until last week when Pashinyan appointed his loyalist Ararat Mirzoyan, who has no foreign policy and diplomatic experience, as Armenia’s new foreign minister. (We can discuss Pashinyan’s equally imprudent choice for ambassador to the U.S. at another time).

While a few weeks ago Aliyev told CNN Turk that he was ready to teach another lesson to Armenia, effectively threatening another war, Pashinyan characterized Azerbaijan’s blockade of the Goris-Kapan highway as Baku’s effort to thwart his “policy of peace” in the region.

No, Mr. Prime Minister, Baku is not encumbering your “peace-loving” aspirations in the region. It has, for all intents and purposes, invaded Armenia. At the same time, Erdogan’s “positive signals” always come with a caveat that is generally detrimental for Armenia.

Hopefully, Mirzoyan’s on the job training will be sufficient to ward off the menace and peril coming from Ankara and Baku and also will temper the irresponsible and shortsighted statements of his boss, who has turned a deaf ear to the existential threats to Armenia’s sovereignty.