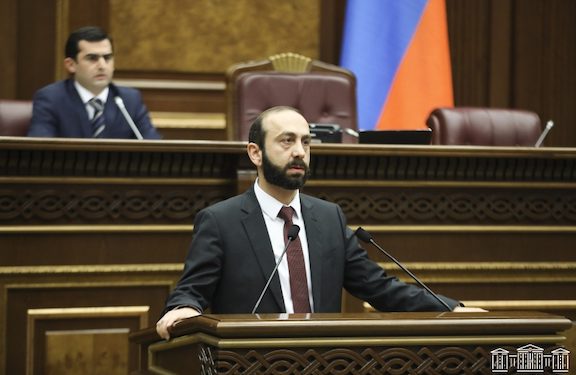 Armenia’s Foreign Minister Ararat Mirzoyan said on Wednesday that despite recent positions expressed by Azerbaijan’s leadership about the Karabakh conflict or its resolution, the international community does not agree with that position “whatsoever.”

Mirzoyan was responding to questions from lawmakers in parliament, where one representative asked him to comment about Azerbaijan’s President Ilham Aliyev’s assertions that the Karabakh conflict ended with the 2020 war and that the OSCE Minks Group Co-Chairs have nothing else to do regarding Karabakh.

“This isn’t the first time the Azerbaijan’s highest leadership is making destructive statements and declaration, to say the least,” said Mirzoyan. “This certainly hinders the discussion of all existing issues in a more constructive atmosphere.”

Nevertheless, he said, the Azerbaijani leadership’s public statements do not always entirely or partially correspond to the approaches that are discussed behind closed doors.

“Azerbaijan’s posturing is one thing, the reality is another thing, the international community’s position is something else,” said the foreign minister.

“Despite Azerbaijan’s position and attempts over the past year to misrepresent the Karabakh conflict as being resolved and that there is neither a conflict nor a Nagorno-Karabakh, the reality is that we’ve seen during this past year that the world doesn’t agree with this whatsoever, and reality isn’t that either,” the Mirzoyan said.

He cited the position of numerous countries, which said during the OSCE Ministerial Summit in Stockholm last month that the Karabakh conflict remains unresolved and called for a settlement mediated by the OSCE Minsk Group co-chairs. “This is the only format empowered with internationally recognized mandate to find a peaceful resolution to the Karabakh conflict,” said Mirzoyan.

The foreign minister reported that the OSCE Minsk Group co-chairs are planning a visit to the region in the near future.

The foreign minister also confirmed that Yerevan has submitted a package of proposals for the process of delimitation and demarcation of borders between Armenia and Azerbaijan.This was announced last week by Russian Foreign Minister Sergei Lavrov, who did not elaborate on the specifics of the proposal.

“Armenia has prepared a package of measures that are aimed at de-escalating the situation on the Armenia-Azerbaijan border, reducing tensions and increasing the level of security and stability,” said Mirzoyan, confirming that the said package has been transferred to Russia. Lavrov said last week that Russia would share the proposals with Azerbaijan.

Saying that he could not report on specific details, however, he said, the proposal is derived from concepts already voiced by the government and the prime minister that include the simultaneous withdrawal Armenian and Azerbaijani troops from the border and the creation of new security mechanisms there.

He also clarified that a commission to negotiate the process of delimitation and demarcation of borders between Armenia and Azerbaijan has not been established, adding that there are conditions under discussion and circumstances that require clarification.

“We are convinced that unless concrete mechanisms are put in place, concrete steps are taken to increase the stability and security of the border—mechanisms to help prevent further clashes, intentional or sometimes accidental—for technical reasons, it will be difficult to form such a commission and to work,” explained Mirzoyan.

The creation of such a commission was agreed to during a meeting between the leaders of Armenia, Azerbaijan and Russia in Sochi late last year.

In discussing efforts to normalize relations between Armenia and Turkey, Mirzoyan, in response to a lawmaker’s question, said that no government of Armenia has ever and will ever attempt to call into question that the Armenian Genocide is a historical fact.