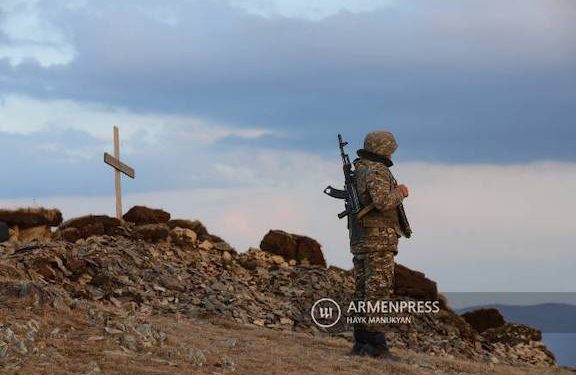 Armenia’s Defense Ministry on Friday announced that six soldiers of the Armed Forces were killed on Tuesday during Azerbaijan’s attack on Armenia’s eastern border.

This week, the defense ministry had only named Meruzhan Harutyunyan, who was buried on Friday at Yerevan Yerablur National Cemetery.

“With mediation and participation of the Russian side, intense efforts continue in the direction of returning those taken captive during the military actions and finding the missing,” said the defense ministry.

On Wednesday, the defense ministry reported that Azerbaijan had captured 13 soldiers and another 24 were missing in action.

Through the mediation of the Russian peacekeeping forces stationed in occupied Shushi, Azerbaijan late Thursday released the remains if three Armenian soldiers killed during Tuesday’s attack, Artsakh’s Emergency Situation Service reported on Friday. The remains were taken to Yerevan on Friday.

According to preliminary information, the bodies were taken from the administrative territory of Ishkhanasar village of Armenia’s Syunik Province.