Yerevan Tells EU that Baku is ‘Intent on’ Military Attacks 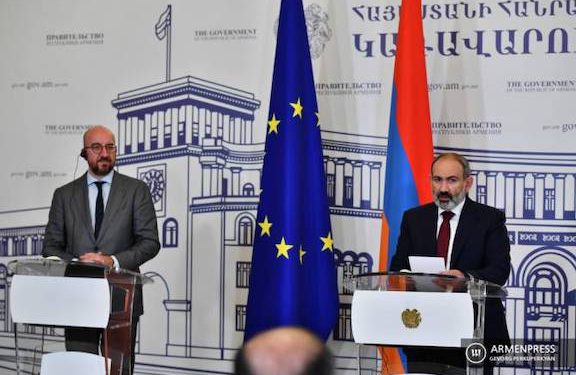 “According to information obtained from unofficial sources, Azerbaijan is intent on provoking new military clashes in Karabakh and along the Armenian-Azerbaijani border. We are now seeing manifestations of that at the Nakhichevan section of the Armenian-Azerbaijani border,” acting Prime Minister Nikol Pashinyan said on Saturday after meeting with European Council President Charles Michel who was in Yerevan for talks.

Michel was visiting Armenia at a time that a two-month border standoff along the border in Gegharkunik and Syunik provinces, which began when Azerbaijani forces breached Armenia’s border and advanced positions, has intensified. Officials estimate that 1,000 Azerbaijani troops are currently camped out in Armenia proper.

“Armenia is prepared for the resumption of negotiations but there has been no reaction from Azerbaijan,” Pashinyan said after talks with Michel.

Michel, who also meet with Azerbaijani President Ilham Aliyev on Sunday, called on Armenia and Azerbaijan to pull back their troops from “contested” sections of their border and embark on its demarcation. He also urged the two countries to avoid inflammatory rhetoric and restart talks on resolving the Karabakh conflict.

Pashinyan also voiced his support for troop disengagement, a precondition he set forth in June after tensions escalated on the border.

In addition to discussing the current post-war situation in the region, Michel reaffirmed the EU’s pledge to provide Armenia with up to 2.6 billion euros ($3.1 billion) in economic assistance and investments over the next five years.

At a press conference with Pashinyan on Saturday, Michel said the “unprecedented financial package” is designed to help the Armenian government continue “democratic reforms” and improve the socioeconomic situation in the country.

The package is part of an “economic and investment plan” drafted by the European Commission for six former-Soviet republics covered by the EU’s Eastern Partnership program.

The commission is specifically seeking 1.6 billion euros ($1.9 billion) in EU grants, loans and loan guarantees for five “flagship initiatives” drawn up by it for Armenia. That includes up to 500 million euros in funding for some 30,000 small and medium-sized enterprises and 600 million euros worth of capital investments in the country’s transport infrastructure, reported Azatutyun.am.

Michel said the projects to be financed by the grants and loans reflect the Armenian government’s socioeconomic priorities.

“I do not underestimate the huge work that will be needed in order to implement and … make this huge financial package very concrete and very visible for the [small and medium-sized enterprises] and for the people,” he told reporters in Yerevan.

Pashinyan said the EU’s pledged funding will give a “very serious impetus to Armenia’s economic development.”

While in Yerevan, Michel visited the Dzidzernagapert Armenian Genocide Memorial and laid a wreath in memory of the 1.5 million victims of that crime.

“I have paid homage at Tsitsernakaberd to Armenian victims. We stand by Armenia and all countries in the region to build a common and prosperous future for their populations,” Michel twitted after his visit to the Memorial Complex.