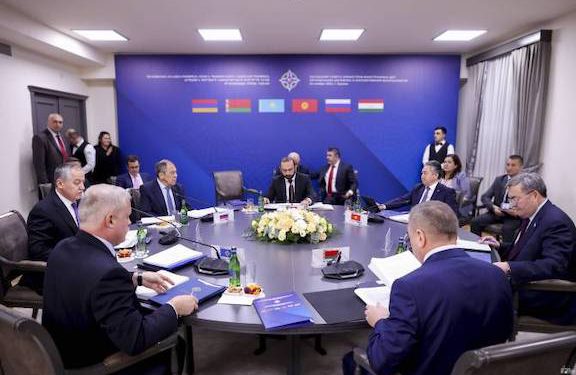 Foreign Minister Ararat Mirzoyan on Tuesday welcomed his CSTO member-state counterparts who have gathered in Armenia for a two-day summit.

Billing as an important meeting since it is the first time the officials are meeting since Azerbaijan’s attack on Armenia in September.

“For us this meeting is important, because this is our first in person meeting in the wake of the September aggression by Azerbaijan against the sovereignty and territorial integrity of the Republic of Armenia,” Mirzoyan told the foreign ministers of CSTO member-states.

The meeting on Tuesday will be followed by a regular summit of the leaders of the Collective Security Treaty Organization. Among the attendees in Wednesday’s session will President Vladimir Putin of Russia, who, according to the Kremlin, will meet with Prime Minister Nikol Pashinyan on the margins of the summit.

“We have about two dozen documents on our agenda regarding issues of foreign policy coordination, military-political cooperation, new threats and challenges, and of course, the situation in the South Caucasus generally,” Mirzoyan told his colleagues at the opening of Tuesday’s meeting.

Immediately after the September 13 attack by Azerbaijan on Armenia’s sovereign territory, Yerevan appealed to the CSTO for military assistance, as is stated in the group’s mandate. After sending a fact-finding mission to assess the situation along the border, as well as a visit by CSTO Secretary-General Stanislav Zas, the organization said it would not send military support to member-state Armenia.

Russia’s Foreign Minister Sergei Lavrov, who is also visiting Armenia, said in early October that dispatching a CSTO monitoring mission might be a possibility.

Ahead of this week’s summit, the Vice Speaker of the Russian Federation Council Konstantin Kosachev said that the conflict between Armenia and Azerbaijan does not fall within the purview CSTO.