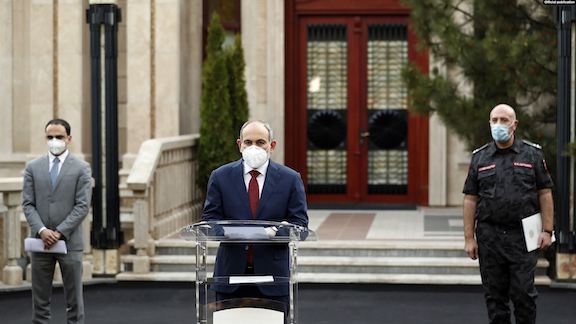 Pashinyan said that noncompliance with social distancing and other rules set by the government has become so widespread that law-enforcement authorities cannot effectively enforce them.

“I am arriving at the conclusion that there is no security or administrative body in the world that can solve the problem of such scale,” he declared in a video address streamed live on Facebook.

“This is not a merely organizational issue,” he added. “Even if it is, no structure, not even the government, can solve this problem unless each of us views this problem as their own.”
Pashinyan pointed to dozens of photographs of people across the country not practicing social distancing which he has received from Facebook users and shared on his page since Tuesday night.

Pashinyan repeated these complaints when he held a daily news briefing later on Wednesday. He said that given the “huge scale” of popular complacency the Armenian police and sanitary authorities should not be blamed for the continuing rapid spread of the virus. He pledged at the same time to ensure a stricter enforcement of the safety rules.

Speaking at the news briefing, the national police chief, Arman Sargsyan, said his officers fined on Tuesday more than 900 people who did not wear face masks in cars and buses. Sargsyan also confirmed that riot police quelled overnight a protest by angry traders at a wholesale agricultural market outside Yerevan who defied sanitary authorities’ order to shut down temporarily.

Pashinyan has regularly stated in recent weeks that the onus is on Armenians to end the coronavirus crisis by wearing masks, observing social distancing and frequently washing their hands.

Critics have responded by accusing him of incompetence and attempts to avoid responsibility for his failure to contain the epidemic. They say that the authorities never properly enforced a nationwide lockdown imposed in March and ended it too soon.

Deputy Prime Minister Tigran Avinyan, who coordinates government measures against the epidemic, said Wednesday that the authorities still hope to avoid a renewed lockdown. He said they will continue to put the emphasis on enforcement of the existing rules and a “substantial change in our social behavior” for now.

Avinian also announced that starting from Thursday Armenians will have to wear masks not only in enclosed spaces but also in the streets and other public areas. This requirement will not apply to children under the age of 7 or adults exercising outside their homes, he said.

Meanwhile, the Ministry of Health reported in the morning that the total number of coronavirus cases in the country of about 3 million rose by 515 to 10,524 in the past 24 hours. It also said that 12 more people died from COVID-19, bringing the official death toll to 170.