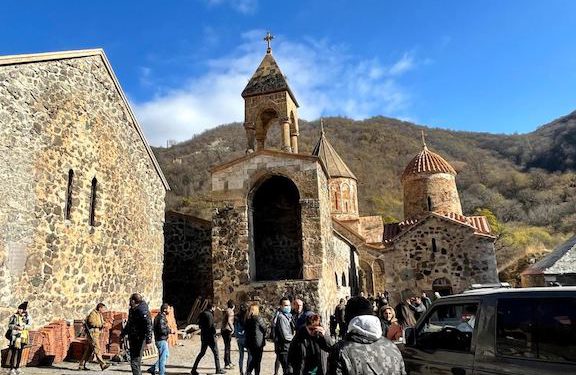 Armenian pilgrims visit Dadivank soon after its occupation by Azerbaijan

Azerbaijani authorities have been sponsoring tours to the Dadivank Monastery by people claiming to be part of the obscure Albanian-Udi religious community.

In its continuing effort to appropriate Armenian cultural, historic and religious landmarks, the Dadivank Monastery, which dates back to the 4th Century, also was given a new name for the so-called Albanian visitors—“Khudavang.”

According to a news item reported by the Azerbaijani APA news agency, a religious ceremony was performed at the monastery. The visit took place through the Azerbaijan State Committee for Work with Religious Organizations, APA reported.

On Monday, it was reported that the cross on the dome of the Armenian church in the Togh village in Artsakh was also removed.

Upon close examination of photos, it becomes evident that the cross has been removed from the done and the Armenian inscription at the entrance of the church has been erased.

The Holy Resurrection Church was not damaged during the 2020 War and was a functioning church until the area was surrendered to Azerbaijan.