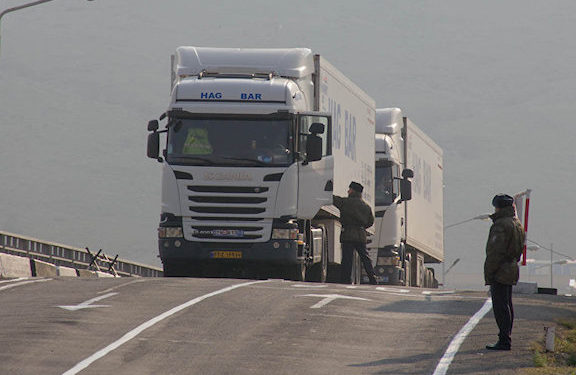 The interior ministry said that the drivers “illegally entered the territory of Azerbaijan,” the Azerbaijani Turn news agency reported.

“Cars that illegally entered Azerbaijan from the Armenian side were identified by officers of the Ministry of Internal Affairs, Border Service, Customs and detained,” said Azerbaijan’s Interior Ministry, according to Turan. “Measures will be taken against the violators in accordance with the laws of Azerbaijan.”

For several weeks now, the Goris-Kapan Highway has been a focal point of the ongoing border standoff, which started in May when Azerbaijani forces breached Armenia’s sovereign border and advance their positions into Armenia proper.

Last week a police check point was established on the highway and on Sunday, Azerbaijani manning the area began stopping truck coming from Iran and levying taxes—or tolls—as much as $500 on the drivers.

It became apparent this week that a 13-mile stretch of the road was surrendered to Azerbaijan in December 2020 as part of the November 9 agreement that brought an end to military actions in Karabakh.

Speaking at a government question and answer session in parliament on Wednesday, Prime Minister Pashinyan said what was happening along the Armenian-Azerbaijani border “has many layers and subtexts, and it is very important to understand them correctly.”

Pashinyan explained that in order to avoid new military escalation, he ordered the Armenian border units to pull back from the area in December.

The prime minister again referred to the law on administrative-territorial division of Armenia, passed by the parliament in 2010, which states that the administrative boundaries of the villages of Shurnukh and Vorotan in Syunik make up the Armenian-Azerbaijani border.

“In December 2020, an agreement was reached that this road from Goris to Kapan should be freely used by Armenia for the movement of vehicles and goods. And I think since that agreement did not mention transportation of foreign goods, Azerbaijan is using this circumstance to retaliate against our [Armenia’s] statements that the trilateral agreements of November 9, 2020 and January 11, 2021 say nothing about providing Azerbaijan with a corridor through Armenia [to Nakhichevan],” Pashinyan said, in an apparent effort to rationalize the chaos created at the Armenia-Azerbaijan border.

He, once again, emphasized that his government is in favor of opening so-called communications links in the region.

“Foreign cargo crossing the territory of Armenia, including on route from the western regions of Azerbaijan toward Nakhichevan, will have to go through the passport, customs and other checks, as established by the legal framework providing transport links between the CIS countries,” said Pashinyan.