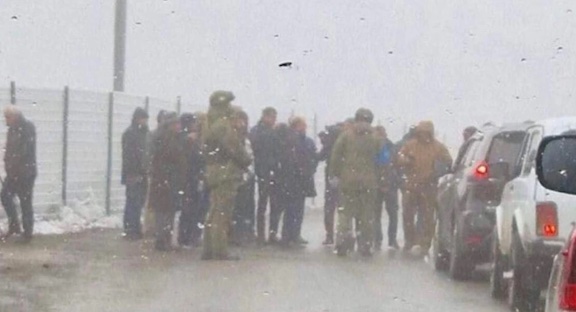 Russian peacekeepers on the Goris-Stepanakert Highway with Azerbaijanis who blockaded the road on Dec. 3

A group of Azerbaijanis dressed in civilian clothes on Saturday morning blocked the Stepanakert-Goris highway—the main road connecting Armenia to Artsakh—at the intersection of Shushi and Karintak, the Artsakh information headquarters announced. The road was reopened in the afternoon.

The Azerbaijanis claimed that the closure was due to “environmental” work, but Artsakh officials called it an act of terror against Artsakh civilians.

“It is obvious that with this move, Azerbaijan is resorting to provocation to interrupt the land connection between Armenia and Artsakh and subject the civilian population to psychological terror,” the ArtsakhInfo said.

“The command of the Russian peacekeeping troops stationed in Artsakh has been properly informed about the incident. The authorized state bodies of Artsakh are taking all possible measures to solve the situation,” the Artsakh authorities said.

The Russian peacekeeping command began a negotiation process with the Azerbaijani to unblock the road.

In order to settle the problem as quickly as possible, the authorized state bodies of Artsakh were in operational contact with the command of the peacekeeping troops.

Azerbaijani press outlets reported that during the meeting with the Russian peacekeeping commnad, the Azerbaijani side expressed concern about what it called the “illegal exploitation of minerals in Nagorno-Karabakh and the consequences of this activity.” The Azerbaijanis highlighted the necessity of on-site monitoring, inventory and environmental study, reported Azatutyun.am.

According to Azerbaijan’s environmental protection ministry, the discussion with the Russian peacekeeping command resulted in an agreement to prepare a road map to implement the so-called on-site monitoring efforts.

According to Baku, the meeting took place at the headquarters of Russian peacekeepers in Khojaly, the Azerbaijanis have already returned to Shush.

“This terrorist act once again proves that Azerbaijan’s primary goal has remained unchanged: to deport the Armenians of Artsakh, to carry out ethnic cleansing and genocide there,” the foreign ministry said in its statement.

“This terrorist action also undermines the internationally agreed upon arrangement on the Lachin Corridor and strikes a underhanded blow to the peacekeeping mission of the Russian Federation that is ensuring peace and stability in the region,” added the statement.

“Azerbaijan’s genocidal policy and actions are a serious challenge to the civilized world and obvious disrespect and disregard of international law. We call on the international community to strictly condemn Azerbaijan’s Armenophobic state policy and take active steps to deter the aggressor,” the statement said.

By blocking the Goris-Stepanakert highway, Azerbaijan is trying to advance its anti-Armenian policy, to paralyze Artsakh, which is also a blow to the Russian peacekeeping mission, Artsakh’s Acting Foreign Minister Davit Babyan told Armenpress on Saturday.

He said Azerbaijan’s latest provocation should not come as a surprise.

“We expect anything from them. They are trying to terrorize, they are trying to persistently advance their anti-Armenian policy, to paralyze Artsakh. They are violating international norms, this is a blow to the Russian peacekeeping mission, a blow to everything,” Babayan added.

He said the international community should draw very clear conclusions from all of this.

“The international community should exert pressure on Azerbaijan, there is no other option. Condemnation is absolutely necessary, but steps must be taken, it is not right to be limited by words only,” Babayan said.