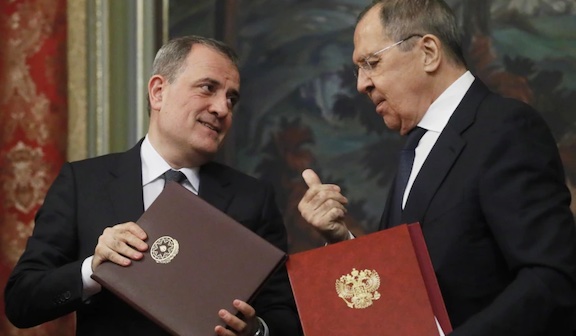 Armenians of Karabakh will have the same rights as all citizens of Azerbaijan, the country’s foreign minister Jeyhun Bayramov said Monday, adding that Azerbaijan’s government will “guarantee the rights of Armenians living in Karabakh as it does its other citizens.”

“Azerbaijan has repeatedly stated that it guarantees that the population of Armenian origin living in the Karabakh region will have the same rights and freedoms as all citizens of Azerbaijan,” Bayramov added during a press conference with his Russian counterpart Sergei Lavrov in Moscow.

He also said that another round of talks with Yerevan over a draft peace treaty might take place before the end of year.

Bayramov claimed that Baku has prepared and submitted a draft peace treaty to Armenia.

“Azerbaijan has prepared a draft treaty based on five basic principles and has submitted it to Armenia,” Bayramov said, adding that following that process two meetings to address a so-called peace treaty had taken place.

Meanwhile Turkey’s foreign minister Mevlut Cavusoglu said that normalization of relations between Armenia and Turkey hinge on the progress of peace talks between Baku and Yerevan.

Cavusoglu said that both Turkey and Azerbaijan have “extended a hand” to Armenia, which he accused of blackmail, provocation and aggression.

Armenia-Azerbaijan Peace Treaty Must be Based on CIS Agreement, Says Lavrov