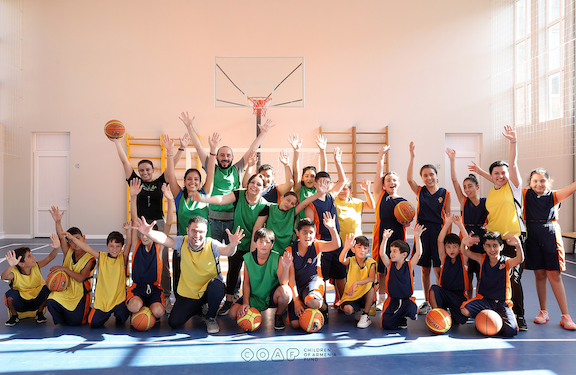 Students in the school's gymnasium

YEREVAN—Over 300 students in the village of Getashen, located in the Armavir region of Armenia, celebrated the opening of their newly renovated school gymnasium on October 8. The large-scale renovation carried out by Children of Armenia Fund was made possible by the generous support of John Akhoian and Family, as well as the Hoops4Hayastan nonprofit organization.

Back in 2015, COAF completed a major capital renovation of the school, developed a Brushodrome (a room where children can brush their teeth), refurbished the school cafeteria, opened a Creativity Lab—a multifunctional classroom equipped with innovative technologies—, and launched a unique AgroSchool project, aimed at educating children in agribusiness and constructing greenhouses, the harvest of which serve the school’s cafeteria.

The newly-renovated gymnasium is a testament to COAF’s commitment to ensuring children are provided with proper fitness and health programs in safe, modern, and well-maintained environments. Providing children the necessary space to live their natural drive for movement will directly benefit their motoric and cognitive development, allowing for better coordination and higher concentration. Additionally, physical education plays an integral role in fostering the social skills of children by teaching them the importance of teamwork, mutual understanding and acceptance, as well as following instructions.

The school administration will now be able to offer a wide variety of physical education classes thanks to the gym no longer being categorized as hazardous. COAF will also continue to offer extracurricular sports programs, with an emphasis on the promotion of basketball.