Editorial: Let’s Support Our Troops and Their Families 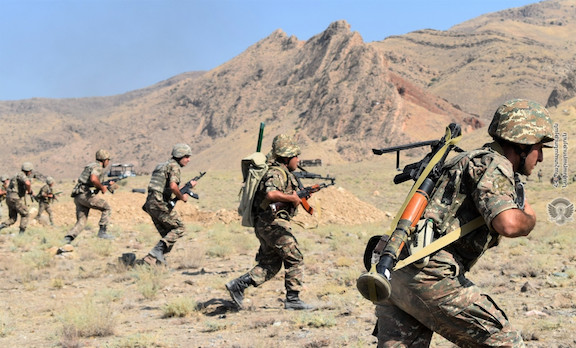 As we celebrate Armenia’s Independence anniversary today, let us pledge to support the Armed Forces of the Republic of Armenia and the families of soldiers who bravely fight—and die—to protect and defend our Nation.

When Azerbaijani forces brazenly attacked civilian and military positions in Armenia’s Tavush Province in July, the Armed Forces proved once again that they will stop at nothing to guard Armenia’s position, defend its borders and protect the Armenian nation. During this valiant effort five soldier died and new heroes emerged, who will go down in our history for risking their lives to ensure the security of our homeland.

Regardless of where one might stand on the domestic political developments in Armenia, everyone can—should—agree that our Armed Forces and their families deserve our unconditional support. That support should not simply come by declarations of our solidarity with our soldiers, but through decisive and concrete actions to not only take part in the development and strengthening of our military, but as a way to become a part of our national security.

One sure and effective way that we can participate in the well-being of our Armed Forces is through regular contributions to Armenia’s Soldiers Insurance Fund, through which the families and relatives of soldiers who have died or have been injured in combat received monthly allocations.

Last month, during a briefing held by Armenia’s Consulate General in Los Angeles, Varuzhan Avetikyan, the executive director of the fund, briefed reporters about the activities and the benefits compensation approaches.

The April 2016 War prompted the government to create the fund, which governed by a board of directors, whose current chairman is Armenia’s Defense Minister Davit Tonoyan. The fund operates transparently and provides quarterly disclosures on its revenue and expenditures.

Since its establishment, the fund has seen a revenue of $54 million, $52.5 million of which was funded through the monthly 1,000 dram contribution by Armenia’s workforce and the remaining funds have been derived from contributions, mostly from Armenian living in the Diaspora.

Avedikyan said that in a span of 10 days this summer, from July 17 to 27, Armenian-Americans contributed 96,190,000 drams (more than $200,000) to the Soldier’s Insurance Fund. He also said that due to the decrease in border skirmishes and military operations from 2017 to 2000, the fund has been able to expand its coverage to include, in the first place, compensation to families of fallen or wounded soldiers from 2015 to 2016, and later expanded that coverage to soldiers’ families from 2008 to 2014.

By contributing to the Soldiers’ Insurance Fund, we can ensure that their families are cared for. At the same time, we should also keep in mind that we can help in efforts to advance the capabilities of our Armed Forces by regularly contributing to efforts that provide our soldiers with better facilities and advanced educational tools to make their lives easier during their compulsive military service.

This is an opportunity for us to make a difference collectively in Armenia’s national security. After all we sleep better knowing that those soldiers are vigilantly, valiantly and heroically protecting our Nation on the frontlines in Armenia and Artsakh. The least we can do is assist in theirs and their families’ well being.