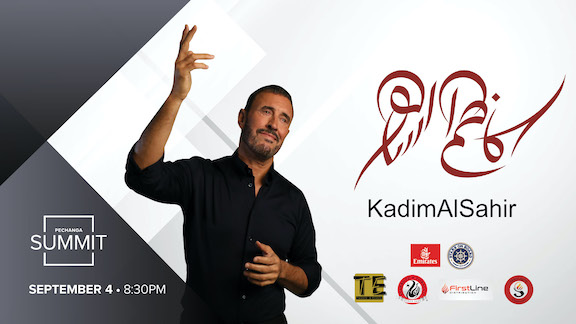 A flyer for Singer Kadim Al-Sahir performance at Pechanga

Mark your calendars for September 4 at 8:30 p.m. to see one of the most famous singers of the Arab world. Kadim Al-Sahir performs live on stage inside Pechanga Resort Casino’s Summit Events Center.

Pechanga Resort Casino is well-known for hosting only the best and the brightest world-renowned entertainers and performers aimed to provide the ultimate experience especially, to diverse American patrons.

With multifaceted talents, Iraq-born Al-Sahir is not only a successful singer but one of the best composers, songwriters, and poets of the country to date. Throughout his more than 30 year career, , he has sold more than 100 million albums, and has performed live to millions of fans.

Dubbed as the “Caesar of Arabic Songs” and “Iraq’s ambassador to the world,” Al-Sahir has written more than 40 hit songs, including the sought after “Ana Wa Layla” (Me and Layla), “Salamtak Men Al Ah” (Get Well Soon) and “La Titnahad” (Don’t Sigh).

Al-Sahir earned for himself the UNICEF appointment as the Regional Ambassador for the Middle East and North Africa, owing to his concern to the plight of needy children, and of how he could be part of those who provide these kids’ good health and the chance of education in difficult times.

Several months ago, Al-Sahirhad reportedly opened his house in Spain to anyone andconcluded his successful concert in Detroit’s Fox Theater. He is also among the judges in The Voice – Arabic version.

Pechanga Resort Casino offers one of the largest and most expansive resort/casino experiences anywhere in the United States. Voted the best casino in the west by USA Today and rated a Four Diamond property by AAA since 2002, Pechanga Resort Casino provides an unparalleled getaway, whether for the day or for an extended luxury stay. Offering 5,400 of the hottest slots, 152 table games, world-class entertainment, 1,100 hotel rooms, dining, spa and golf at Journey at Pechanga, Pechanga Resort Casino features a destination that meets and exceeds the needs of its guests and the community. Pechanga Resort & Casino is owned and operated by the Pechanga Band. For more information, call toll free (877) 711-2946 or visit the website. Follow Pechanga Resort Casino on Facebook, Instagram and on Twitter.